“Our work with Superflux has introduced a new dimension in strategic planning that UNDP had no experience with before – experiential futures and strategic foresight. The Mantis project has empowered us to better understand how organizations will be structured, funded and function in order to most effectively address the Sustainable Development Goals and beyond.” Volatility, uncertainty, complexity and ambiguity increasingly haunt our present, and various possible futures. Urbanisation and migration of vulnerable people to fragile states will continue to change the nature and location of poverty over the next thirty years. Due to climate change, demographic shifts and the pace of technological advances, the basic needs of developing communities will change. To rise to these new challenges, international development organisations will need to be audacious, adaptive and proactive.

Innovation leaders from three organisations BOND, UNDP and Nesta were concerned by a pervasive culture of short termism and risk aversion within the international development sector. Kathy Peach (Bond), Milica Begovic, Benjamin Kumpf, and Alexandru Oprunenco (UNDP) and Glen Mehn (NESTA) asked us to help them galvanise development practitioners into unconventional and longer term thinking. How could we help them imagine alternative ways of thinking about, and doing, development?

OUR FORESIGHT AND DESIGN PROCESS Our foresight and speculative design process is multitudinous, simultaneous, nuanced, and organic. We combined data with imagination, tactile investigation and prototyping to transport practitioners beyond the present day international development landscape they were familiar with. This included ethnographic research, as well as workshops with various practitioners from the development sector including Indy Johar and Clare Algar. A combination of data, tacit knowledge of experts, and their hopes and fears became an invaluable resource, helping us challenge assumptions and question biases. Extrapolation of trends, weak signals and uncertainties informed the subsequent world building stage, and we quickly realised the outcome would be a new kind of international development organisation. Not necessarily an optimal development organisation, but a provocation that would inspire and challenge practitioners, foregrounding a multitude of ideas and weak signals.

The stakeholders’ thinking had surfaced four possible scenarios. These were mapped on an axis of power vs coordination ranging from global fragmentation to co-ordination and decentralised to concentrated power. The organisation which would exist in any of these future scenarios had to be very different from one we would encounter today. Instead of being large, slow, and bureaucratic it would need to be proactive, tentacular, autonomous, transparent, virtual, deregulated, nimble, parasitic, amorphous and unconventional.

INFILTRATION AT THE BOND CONFERENCE AND AWARDS

We designed and created the intricate details of just such an organisation: Mantis Systems. We honed the business model; developed the branding and a social media strategy; defined the AI’s cognitive functionality; and produced products including a game trailer, a demo of the app and a NFC box which installed fake ransomware on Android phones with one tap. The next step was to install Mantis Systems as a ‘real organisation’ in an exhibition booth at the Bond Annual Conference and Awards, Feb 2018. Working undercover is not our day-to-day approach, but it was useful as we wanted to directly engage with over 1000 international development professionals. Anab and Millie were ready to masquerade as Co-founders of Mantis Systems: a Risk Analyst and Behavioural Scientist respectively. Visitors began to approach the booth to find out more. WHAT IS MANTIS SYSTEMS?

Mantis Systems proactively identifies and prevents global systems risks. As a nimble and non-hierarchical organisation, Mantis has a small core team. It leverages the power of artificial intelligence, distributed computing, and a worldwide citizen volunteer network to meet its goals.

The purpose of Mantis Systems is to implement high impact mitigation strategies using minimal resource. Rather than search for singular, linear solutions, the Mantis AI generates multiple hypotheses and interventions in novel ways. From there, it creates effective actions that are grounded in the contextual realities of those who might be worst affected by the risk.

We developed two case study pilot interventions to show what a world where Mantis existed might look like:

Mantis Systems identified an active exploit capable of targeting mobile banking systems in Kenya which could have shut down an entire rural community’s access to basic amenities like food, transport, shelter and healthcare. After unsuccessfully attempting to elicit action via social media, Mantis developed an alternative approach for preemptive action: a software exploit which targeted mobile finance users in Kenya. This software simulated ransomware attacks on vulnerable mobile phones, before sending warnings and instructions on how to patch. This not only raised awareness but also initiated a system-wide immune response. 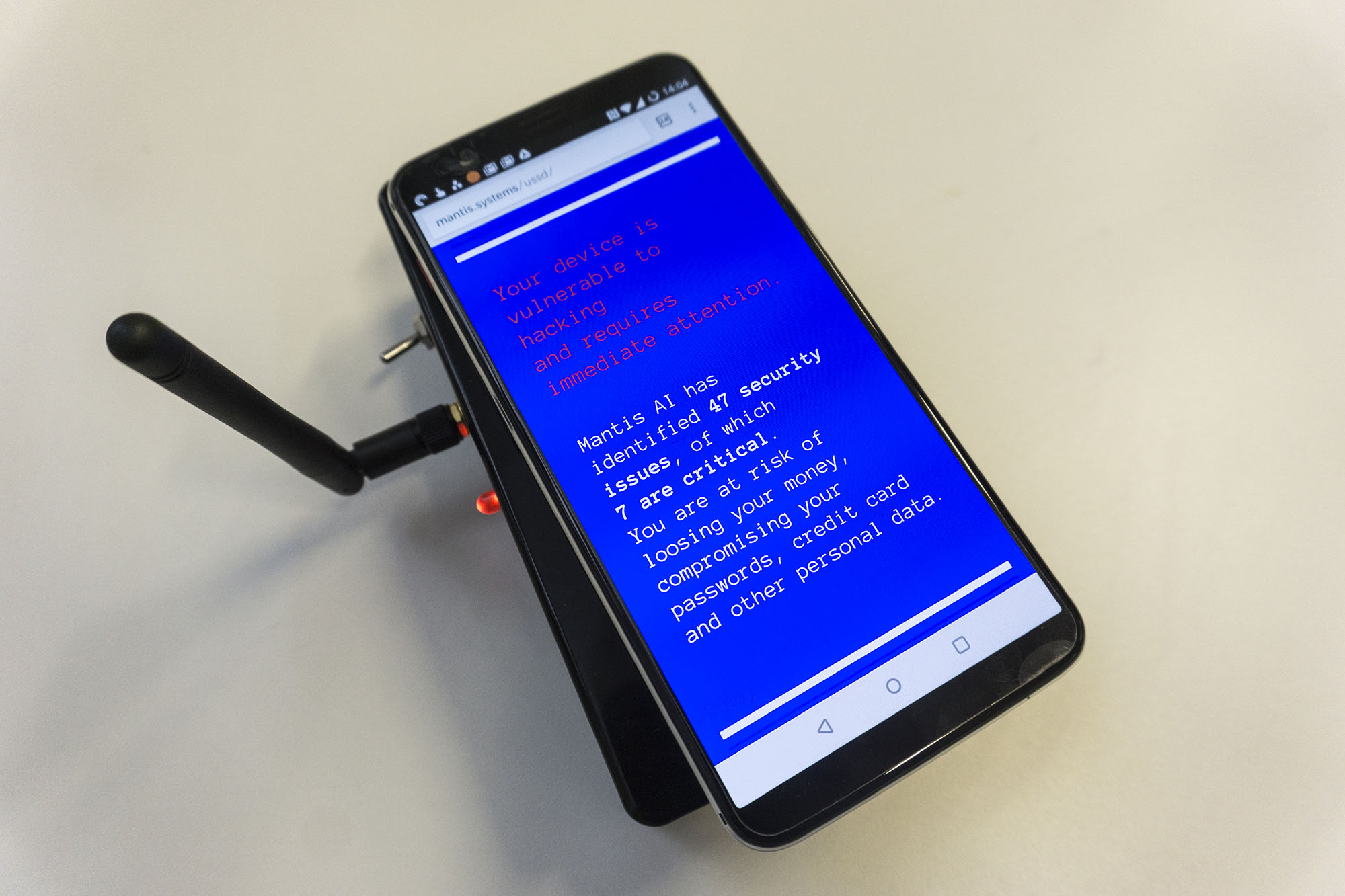 In this case study, Mantis tackled the issue of vulnerability of the global food system to climate shocks. The gap between food supply and demand was predicted to double by 2050, with society at risk of total collapse. Mantis’ risk modelling algorithms identified Ethiopia as especially high-risk. The AI proposed and modelled multiple strategies to leverage influence within this highly complex system, and finally tested a ‘non-linear’ information strategy. The AI predicted that driving global demand for climate-resilient ‘ancient’ crops such as sorghum (and reducing demand for resource-intensive crops such as maize and wheat) grown in Ethiopia would help change consumption globally and locally, reducing food insecurity over time. RESPONSES FROM THE BOOTH AND LEADERSHIP WORKSHOP

The infiltration tactic worked. Overwhelmingly, people embraced Mantis Systems and sought to collaborate. People wanted to download the game, use the app: they engaged with Mantis fully. Importantly, people contextualised the developments Mantis represented. They drew comparisons with their own organisations.

We received partnership, funding and media offers, and were invited to present at international conferences and lead training workshops across the finance, healthcare, transport and insurance industries. Predictably, insurers saw synergies between our approaches with one executive declaring:

“Love the game and app idea. We should talk about how to partner.”

Another broker was thrilled by the existence of Mantis:

“Data is everything. I really like Mantis. I think it’s really exciting.”

Surprisingly, the strongest emotional reactions were those of excitement and envy, clearly indicating an openness in the sector to embrace new approaches. We did wonder though, when and who would challenge the premise of this organisation: conceptually, ethically and functionally. Reassuringly, we did get some critical questions. For instance an attendee from Privacy International asked many questions:

“How do volunteers consent to their data being used? Do we sell or share the behavioural insight data with anyone else? Beyond this, what open source data is Mantis accessing? How do you verify that this data is actually open source?” A software developer was overtly cautionary: “How long will you be able to look after each Mantis action and decision, until you don’t even understand the predictions or actions it is making anymore?” For the second part of the provocation UNDP, Bond, Nesta and Superflux led a workshop at the conference where we revealed the concept and process behind Mantis Systems to 125 senior members from numerous organisations. We then asked participants to collaboratively explore what the risks and potential of an organisation like Mantis are, and what such “outliers” might mean for their own work, and the sector more generally.

There was a palpable feeling of optimistic disquiet in the room as participants began to reflect instantaneously about Mantis’ organisational structure, new technologies and engagement model. Key findings from the workshop:

There was a real desire to explore what new forms, a proactive, nimble, organisation might take, especially for large, bureaucratic NGOs. The idea of engaging citizens through alternate incentives was appealing. Perhaps one of the biggest findings was the real desire for alternate forms of funding which would reduce dependency from traditional donors who dictate strategy and approaches. There were many questions around the future of work in this sector, and what new forms of ‘human-AI’ relationships might be like.

As expected, Mantis helped surface the challenges of bringing AI into everything, and how the banality of machine learning is also its power. Important questions around the ethics of automated decision making and data collection were raised, which we hope will enable future strategies within these organisations to be more thoughtfully developed. Plunging attendees into a possible environment helped them more fully comprehend consequences. Rather than try to convince people of a perspective by talking to them about theory, we let them experience firsthand their embodied emotional reaction to what such a reality feels like. What might this situation mean for them, and for others, if it was happening now – to their current self rather than their future self? How does it align or conflict with their beliefs and intentions? We let people make up their own minds in the moment, as to whether they felt comfortable with, or would rather avoid the situation they found themselves in.

People are experts on their own individual lived experience and the sectors they work in. But we found that the direct simulation of one possible future helped them think critically about their assumptions and biases. The immediacy of experience, and the simultaneous distance from being held ‘responsible’ for what it does, enabled them to imagine multiple possible outcomes rather than sticking to a linear narrative of past, present, future.

During the initial part of the infiltration, we did not tell people that Mantis was not real, and whilst that raises ethical questions, this temporary suspension of disbelief was exactly what let people reflect, critique and engage with the work as they did. But it was extremely important to manage the infiltration carefully: keeping notes of every conversation and being cautious at points where conversations became really in depth, directing people towards the reveal workshop to find out more or even quietly revealing in the moment that this was in fact a fiction. The business cards we handed out had real email addresses, so that if people reached out after the conference, we could explain that Mantis was a speculative design provocation.

Even after we revealed that Mantis was fiction, many struggled to believe it didn’t genuinely exist.

VALUE OF CREATING SUCH WORK

Research by neuroscientist Joseph Le Doux and neurologist Antonio Damasio, indicates that the relationship between our brains, bodies and emotionally relevant stimuli in our environments is how meaning and significance emerge for us human beings.

This, perhaps, is one reason why material, situated and multi-sensory perception of Mantis helped people feel as if the AI was making decisions and interventions in the world now. Experiencing the feeling of having your phone hacked with ransomware, or of a multiplayer crisis simulation game gathering human behavioural data in situ helped people comprehend the ‘change’ Mantis had made in the world.

This is something for their experiencing selves – in the moment, right now – to respond to. It is no longer something they can put off for their future self to deal with.

We curated conditions where people felt encouraged to embrace future uncertainty with critical thinking skills and preparedness, rather than fear or unfounded optimism. Mantis Systems contained many weak signals we wanted development leaders to consider, critique and prepare for today, to help them thrive and respond with agility in complex, fluctuating futures.