‘The future is a date, but it is also a story about our lives today – present, but unevenly distributed. It is on page 37 of a discarded Sunday colour supplement wedged into the back of your tube seat. It’s the yells that echoed in the underpass after the pubs threw everyone out last night. We’re all looking for chipped shards of futures in our own ways, in our own places.’

Our ‘Power of 8’ project’s public engagement phase highlighted concerns about climate change and some deep-seated nostalgia for a simpler, ‘green’ world. The participants wondered whether “fantastic technological innovations might still … save us from doom”, expressing their determination to consider the implications of radical and disruptive technological change.

Following a video appeal and letter-writing campaign, we assembled a heist-like team that included a biotechnologist, a policy advisor, a permaculturalist, an educator, a retired civil servant and an architect. Their mission? To imagine optimistic, collective expressions of our futures, today.

Intent on building a public discourse around the aspirations of ordinary people, we worked to reconcile the diverse perspectives of participants, looking for points of conflict and consensus between disciplinary perspectives and worldviews.

To facilitate this process, we created the framework of an alternate future ecosystem called ‘Acres Green – a cypher for the London neighbourhood in which our outputs were to be exhibited – where people balanced a pragmatic need to live closer to nature with their impulse to subvert and control it.

The prototypes, films and installations we produced illustrate the ambiguous relationship between the natural and the technological: in Acres Green, prosthetic trees bear multiple fruits, synthetic pollinating creatures called the ‘Beamer Bees’ live amongst the radio waves, and robotic flocking clouds create microclimates, bringing rain to where it’s most needed. These were four of our proposals for this re-engineered ecosystem.

In the wake of colony collapse disorder, experts have struggled to pin down reasons for the sudden and unexpected disappearance of bee colonies – variously citing the risks of GM crops, pesticide posioning, invasive parasites, malnutrition, and the stresses of being moved over long distances. Some even suggested that the proliferation of electromagnetic radiation might be to blame, with radio waves ‘confusing’ the bees’ radar such that they are incapable of returning to their hives. Many other pollinators are similarly imperilled, including native bees, butterflies, bats and hummingbirds.

In our discussions, we quickly realised that this was a particular area of concern. We were interested in exploring ideas that touched on some of the emerging technologies being explored in science labs today, but were determined to avoid naive techno-utopianism. By approaching the issue with a broadly critical mindset, we hoped to further the debate, imagining some of the new design possibilities enabled by these technologies, and visualising some of the sensual, emotional interactions that might emerge.

In the context of Acres Green, we created the ideas of ‘Beamer Bees’, or ‘Beamer Signum Apis Melifera’, engineered by a community of biologists and hired bio-hackers to service under-pollinated trees, plants and vegetables. Radiowaves direct the beamer bees toward crops requiring pollination. They are produced in a limited number each year, and their interactions with the remaining bumble bees and other creatures are tightly monitored. This is a video showcasing the making of the beamer bees, and their interactions with our electromagnetic landscape.

An illustration of how the ‘Beamer Bees’ are made: 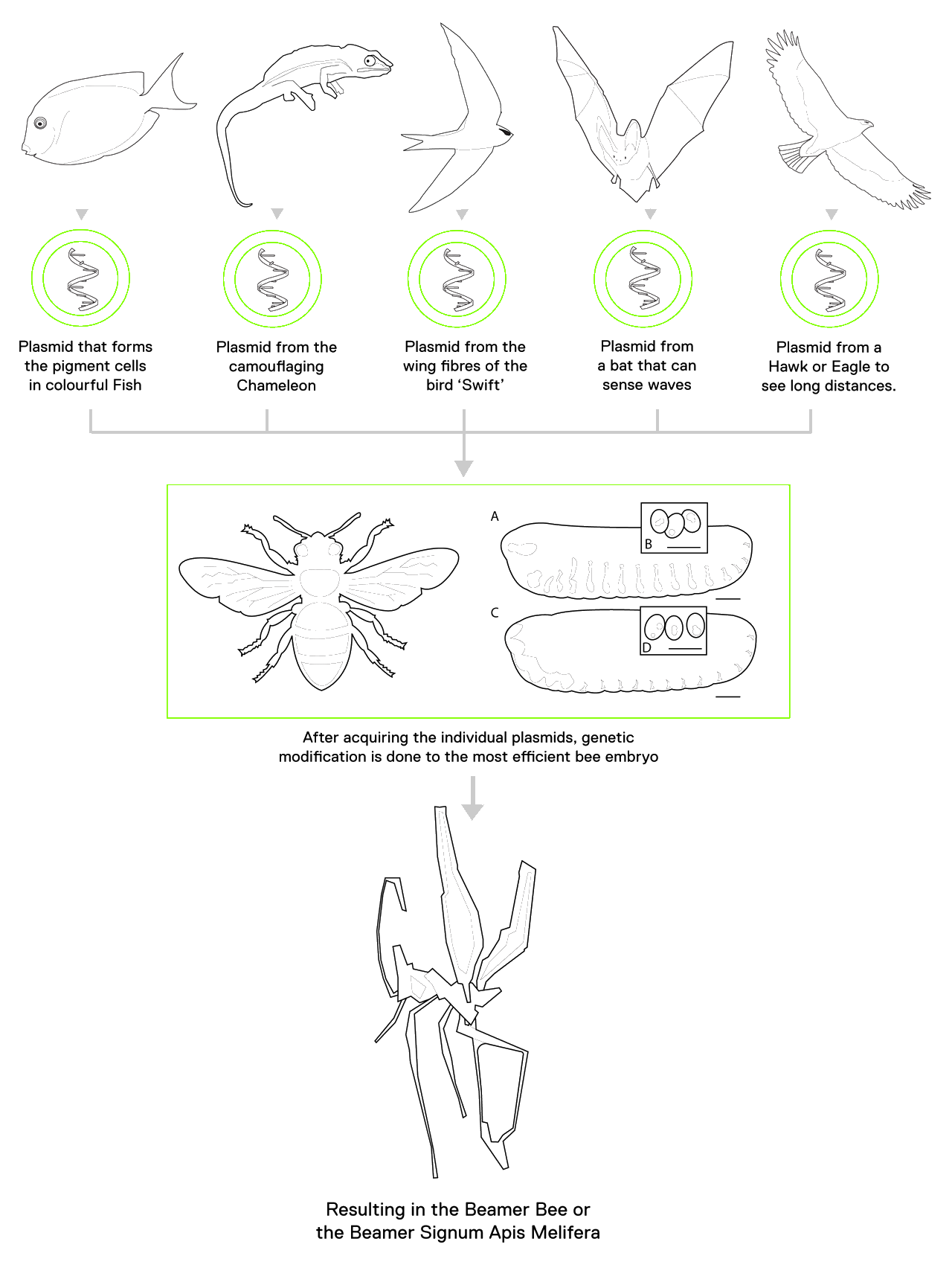 Through illustrated montages and scenarios, we demonstrated the many ways Beamer Bees have become part of life in Acres Green. The residents can buy licenses to call the bees, with license-holders using bugles or other personal mobile devices to transmit radiowaves that the bees can detect. The bees then follow the waves to their source.

The following images show one family’s daily interactions with these new creatures. 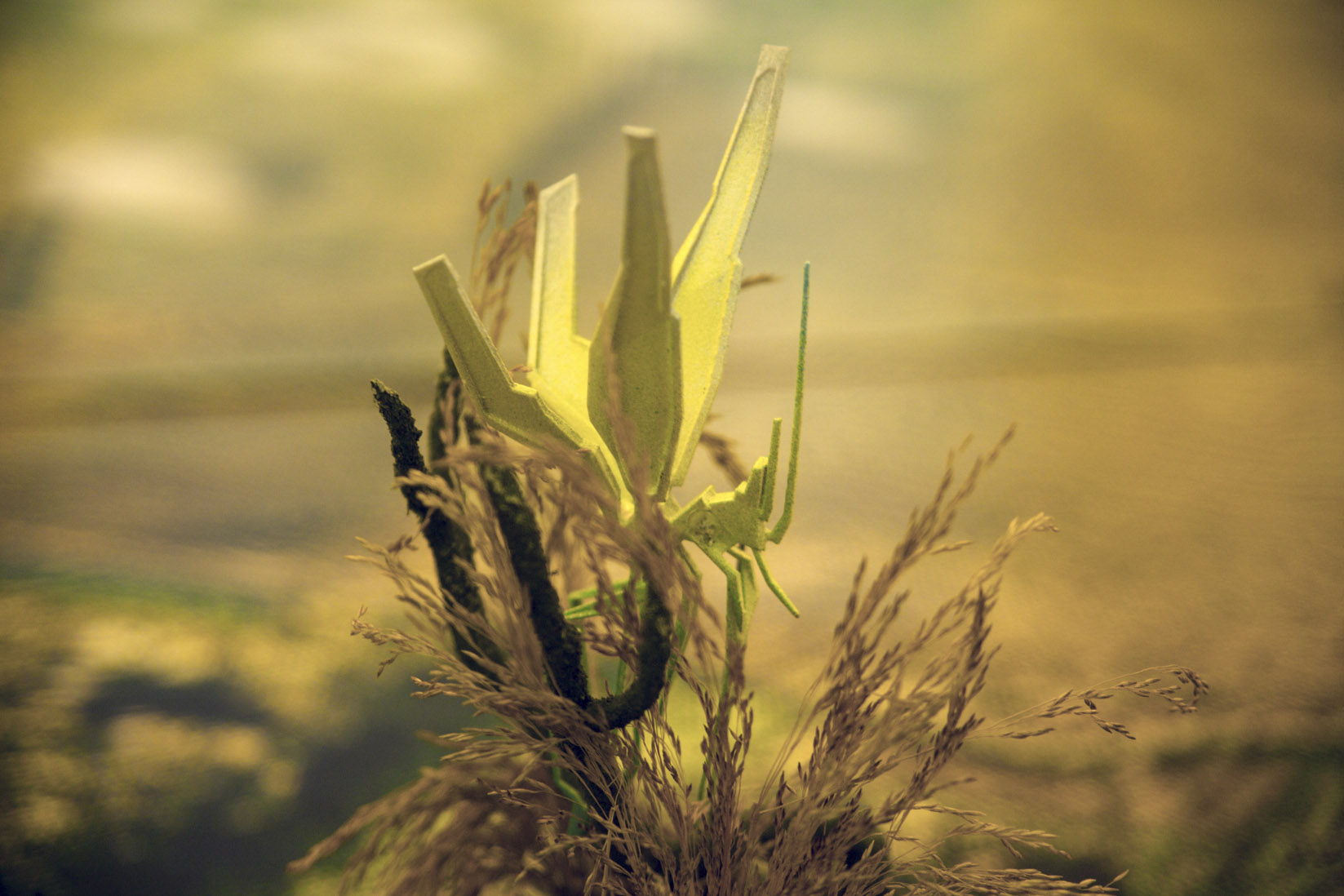 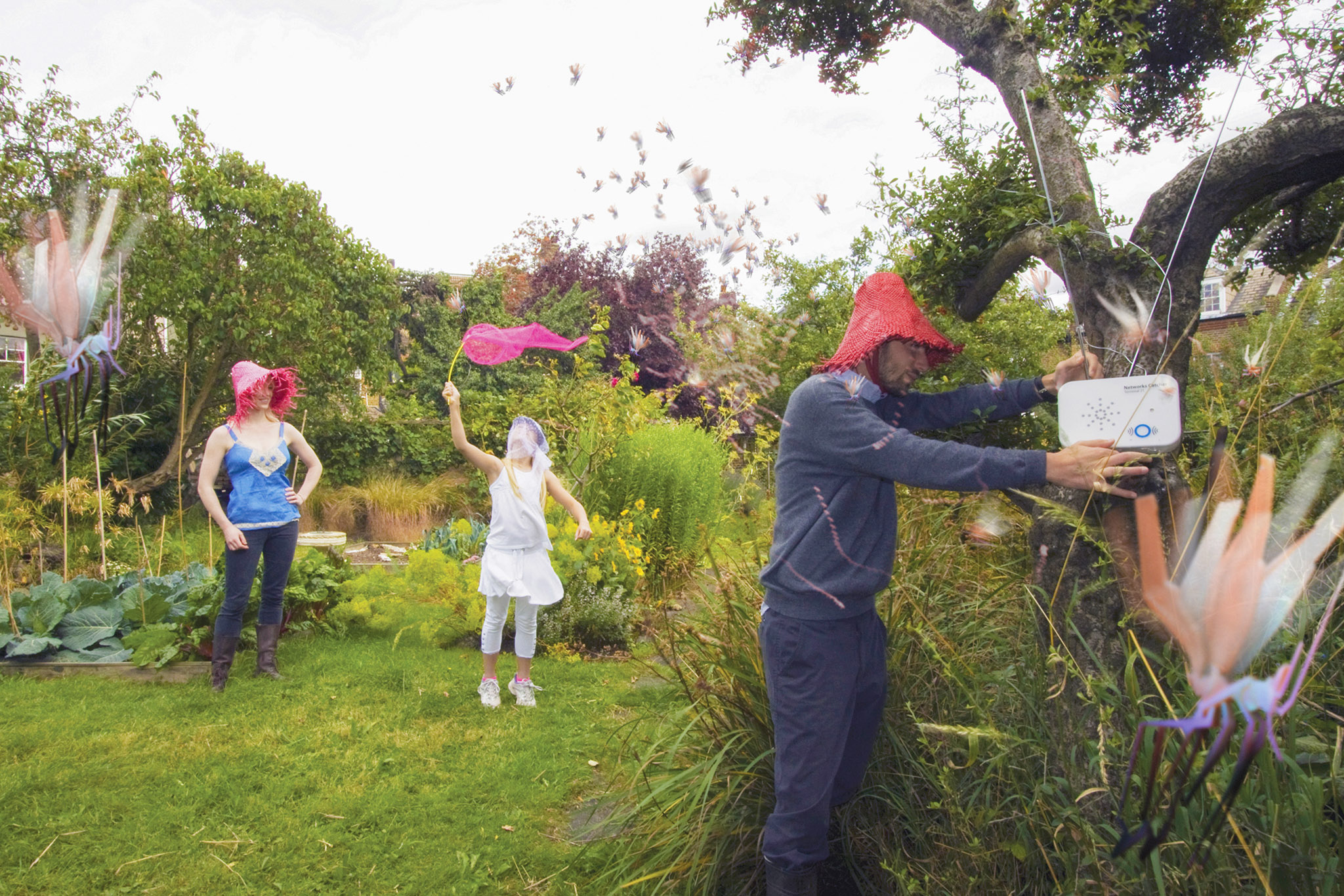 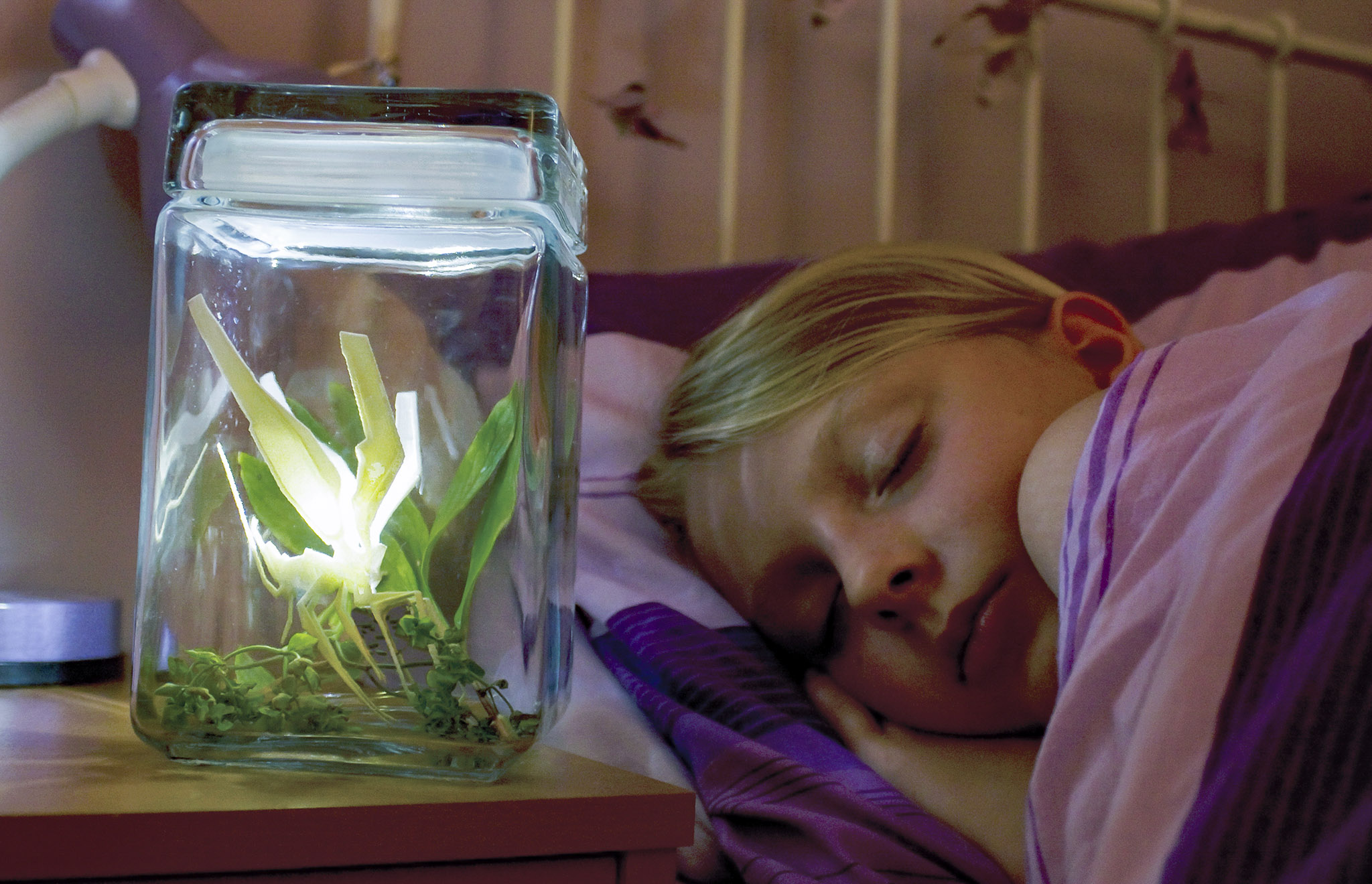 We were interested in exploring how current technological innovations might aid our manipulation of weather and microclimates. Eager to quickly move away from a purely theoretical discussion, we were interested in the ways people might engage with our ideas if they were fleshed out and made more ‘believable’, as scenarios and design fictions.

Occupying the full width of a road, and towering some three or four storeys over the surrounding buildings, a flora-clad mountain looms over Acres Green. Massive but somehow inviting, the community mountain lures people into the gaping, cave-like entrance at its based. Ingeniously assembled from long plank-like blocks, warm to the touch, a local resident tells visitors that the mountain is filled with a wax-like material harvested from the beamer bees. The wax enables a more efficient means of heat storage, capturing temperature change as the wax becomes a liquid. The blocks prove relatively simple for locals to fill and assemble, and, as a result, each springtime, the residents of Acress Green gather, building the massive deifice several terraces higher than the year before. 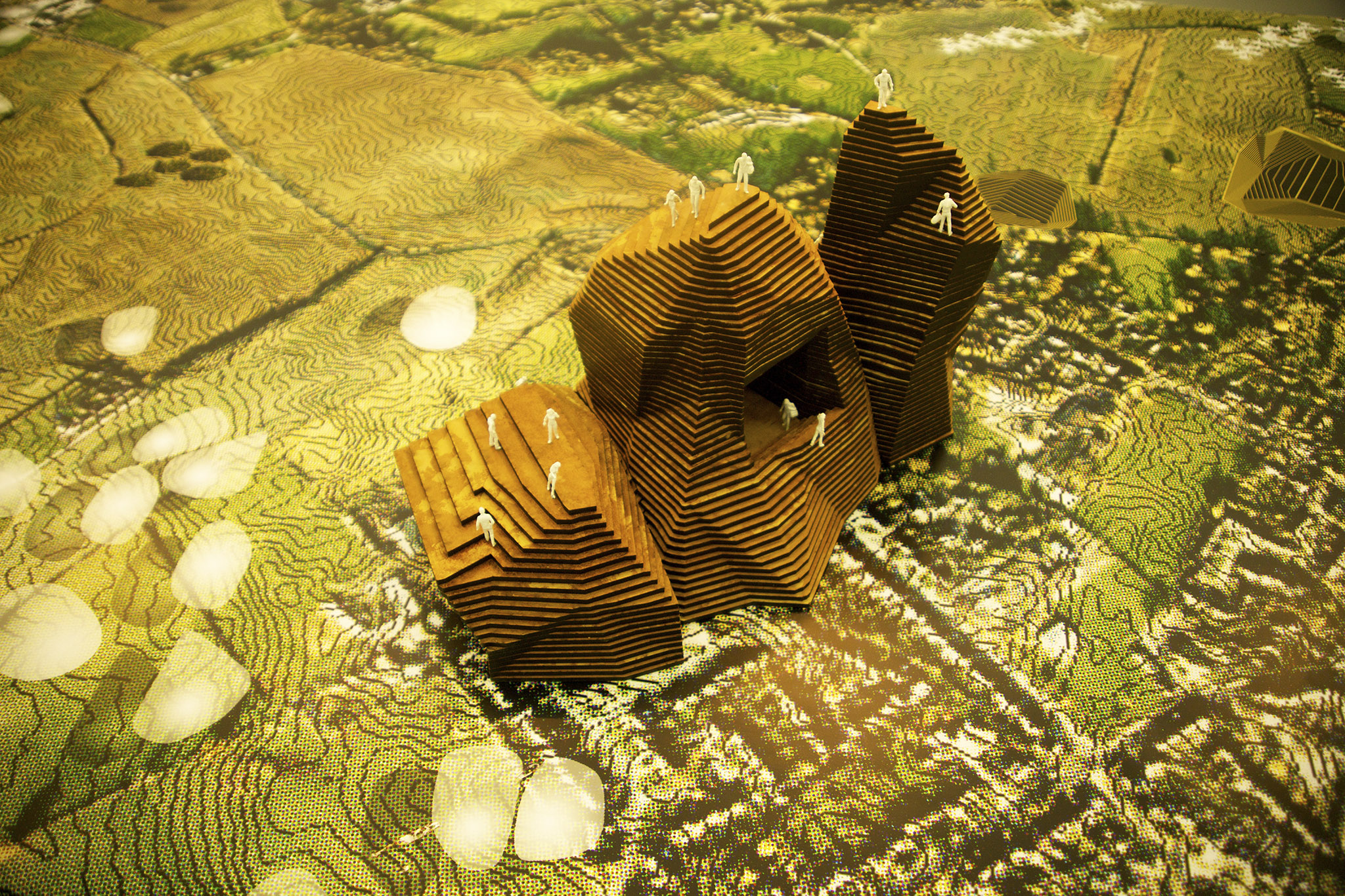 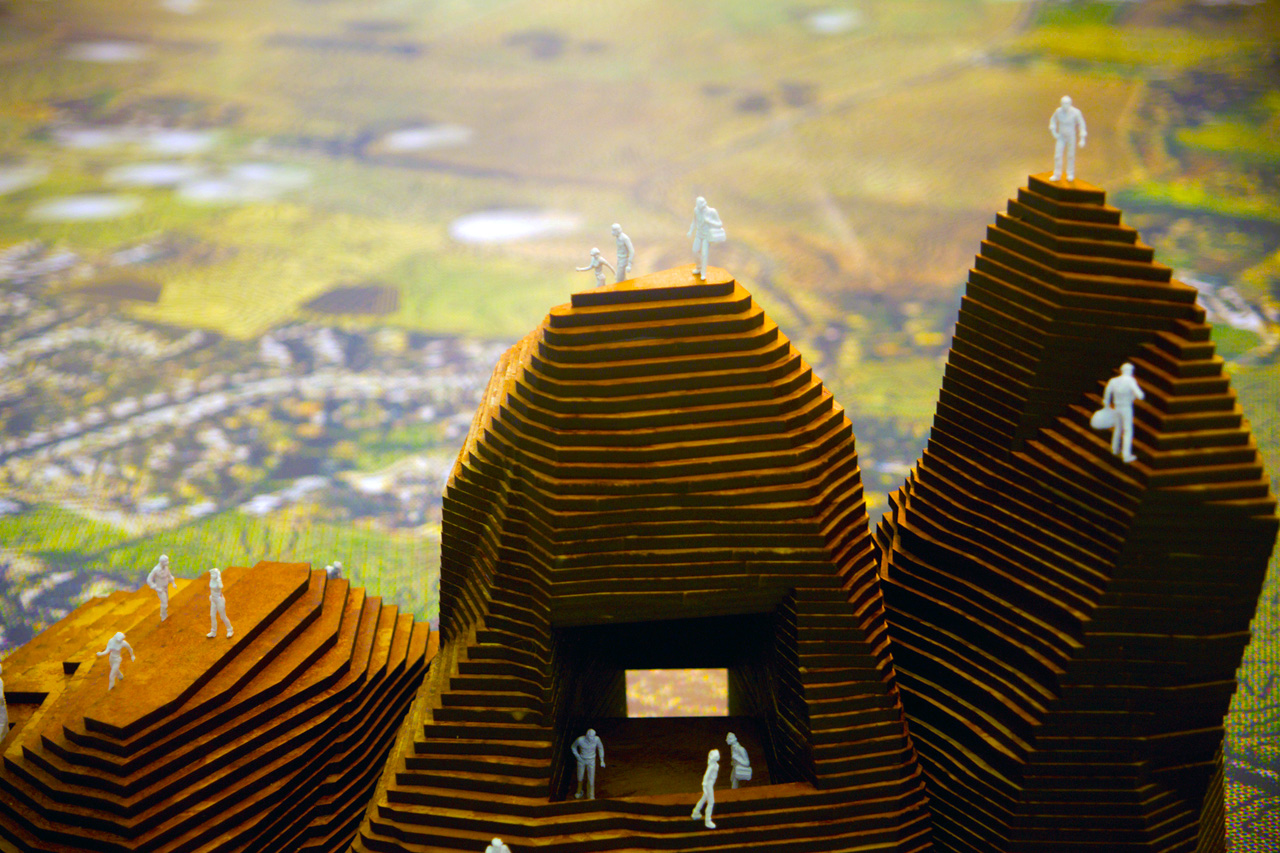 As with the beamer bees, montages and scenarios helped make the ideas more tangible. The community mountain had a role for every season – as a plant-growing ‘vertical garden’ in the summer months, a school for adults in the autumn, a venue for clandestine meetings in the winter, and a convivial community building project in the spring.

The mountain was mobile, wheeled around Acres Green to suit different needs, with the silhouette of the mountain-in-transit providing a spectacle and emblem for the community. Smaller structures of varying specification were deployed across Acres Green for moss-harvesting, bird-watching, saunas, therapy rooms, and meeting points for creative exchanges.

In managing Acres Green’s microclimate, the community also experimented with autonomous, artifical clouds – generating and directing rainfall to keep the neighbourhood green, even in the height of summer.

Each cloud is the size and mass of an adult man. Manufactured with precision pleats and expertly executed jointing, the cloud is deployed as a folded surface with unfurled wings spread into a complete and airtight enclosure. These microclimatic machines were able to green small pockets of the ecosystem, expanding to collect moisture and later contracting for efficient movement. Suspended in the skies, they sought out particularly humid air systems, following low air pressure, collecting moisture on their outer skins and collecting droplets in their fuselage.

The ‘new clouds’ – for that’s how they came to be known – were semi-autonomous in their search for moist air. Their sensors allowed them to surf the waves of air streams, navigating atmospheric shifts with a precision only matched by their animalistic beauty. 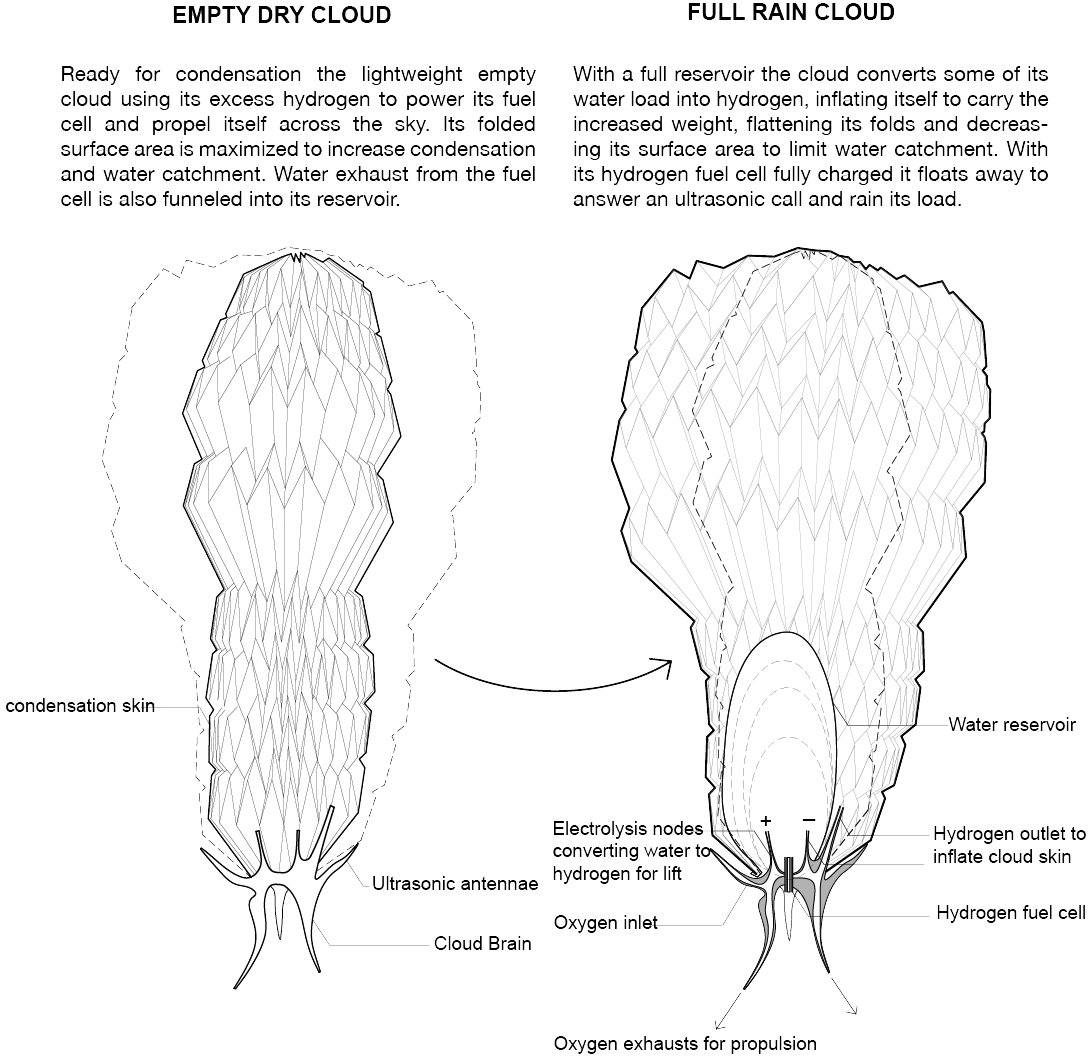 With these artificial clouds, Acres Green’s hack-happy inhabitants had yet another outlet for their obsessive research. Sonic arrays provided an improvised control terminal from which the clouds could be directed. Rooftops became the venue for an urban-scale game of one-upmanship. Normally, the clouds would trace the path of natural forces, making visible the currents of warm air and humidity in the lower atmosphere. Now interrupted, the clouds became an extension of the collective competitiveness and entertainment-seeking behaviour of the geek classes. 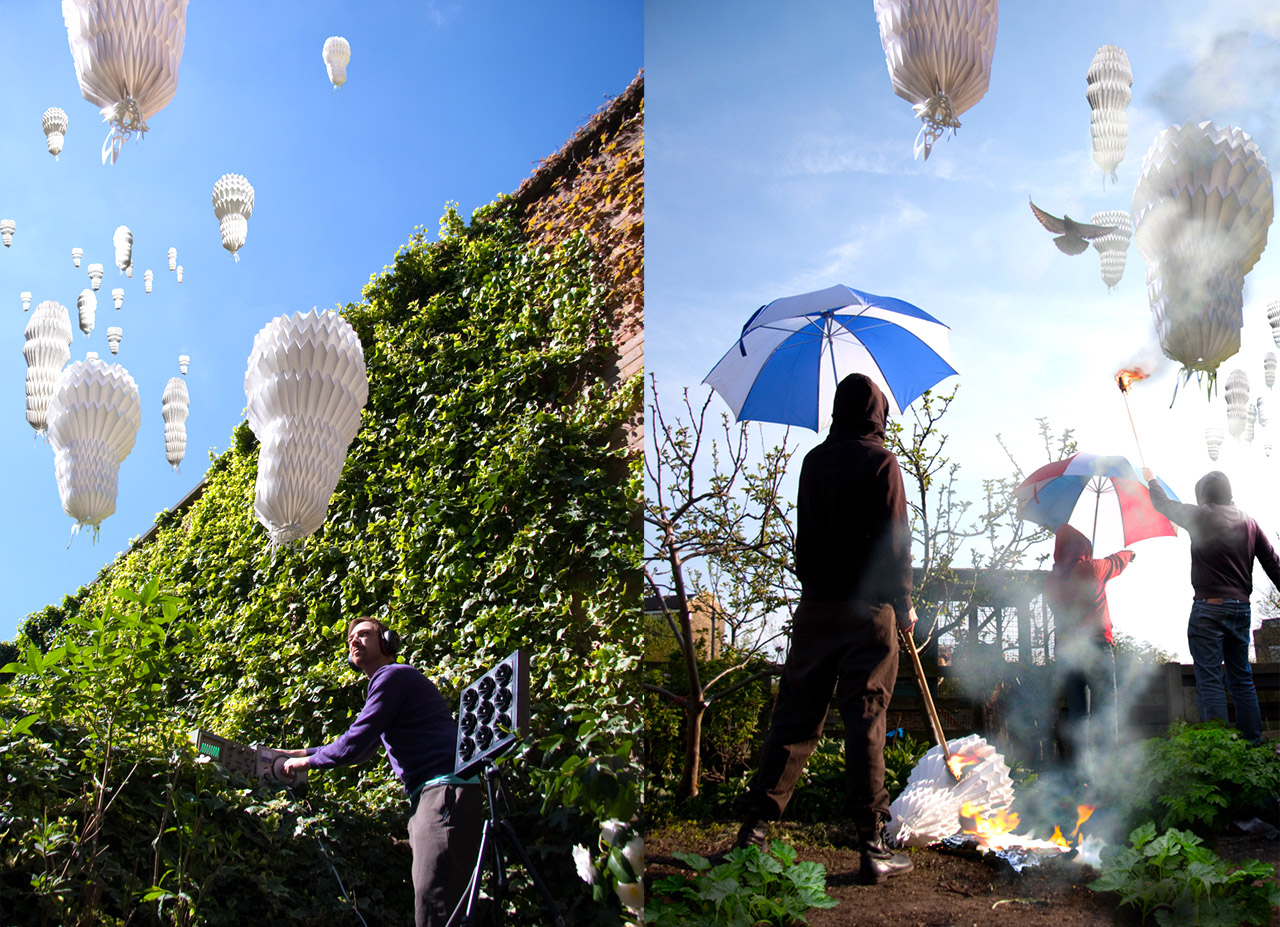 With super-efficient pollinators and manufactured weather, the edible gardens of Acres Green thrived, giving rise to a range of new (even feral) economies. Some communities openly advertised their new methods, such as the Murgatryod Cider Company, who turned unused fruit into the best cider and apple juice in Acres Green. 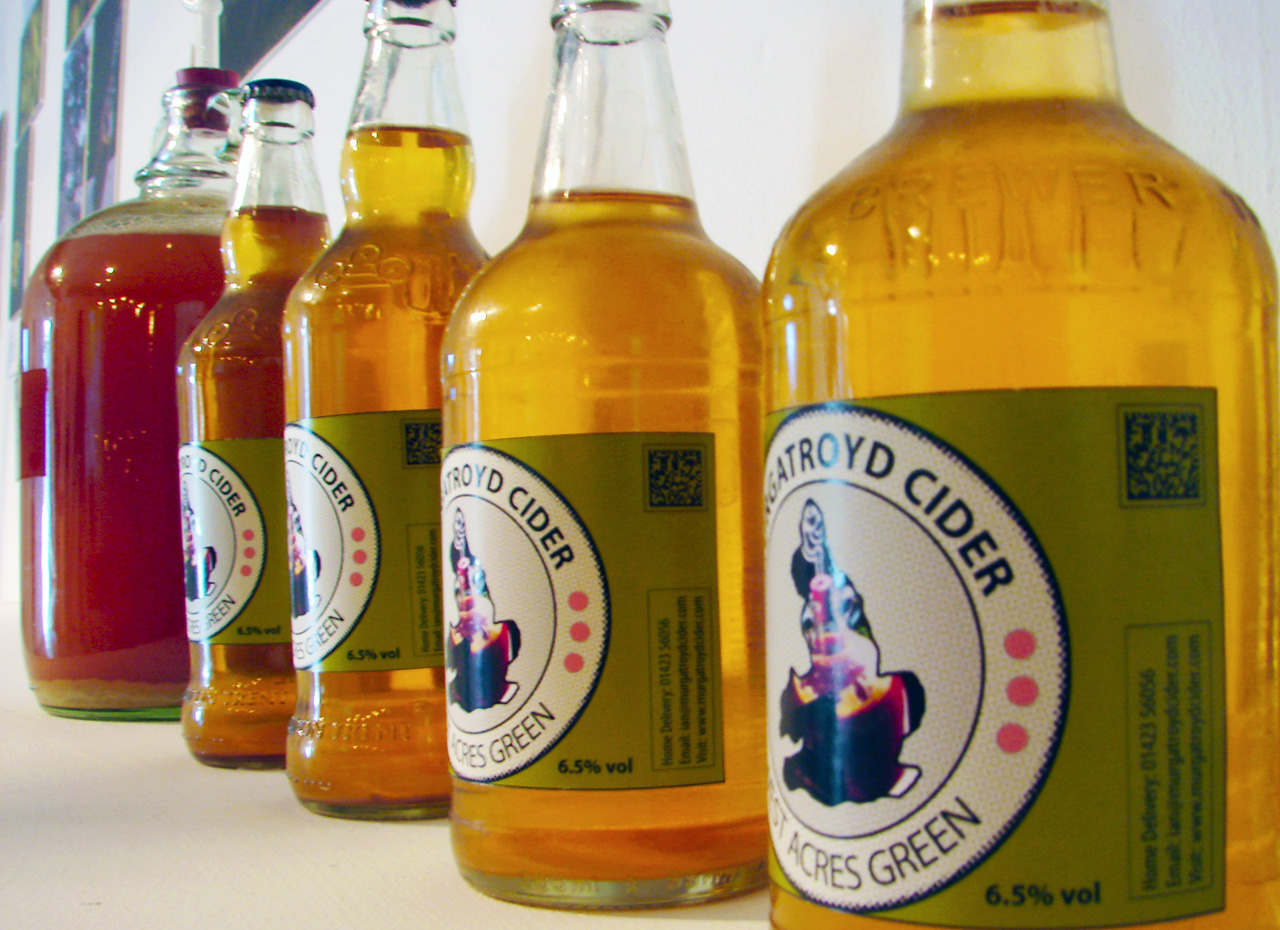 These possibilities and scenarios, props and prototypes were all presented in an exhibition as part of the London Design Festival. Following that, we participants went our separate ways, while continuing to build on the learnings from the project.

Of the final exhibition, as Charlie said:

“We’re all looking for chipped shards of futures in our own ways, in our own places. The Power of 8 has gathered a few that we found to create one mosaic into which our hopes squeeze. The project has produced a vision of a future, but the way it came about is a reflection of how future will come. None of us feels entirely comfortable with Acres Green, but we can all see our place in it – a bit like the future. Our hope is that somehow through the chaos of different ideas, inventions and organisations a more loving, just and humane future can prevail.”