What does it mean to belong to a place – socially, geographically and emotionally? Having lived in London for just under a year, Anab explored this question through a series of cultural probes that were distributed to friends and willing strangers.

One of the objects in her probe pack was a “Wanted: ______” card, which she distributed to participants, asking them to fill the gap with the thing they most wanted for their neighbourhood. 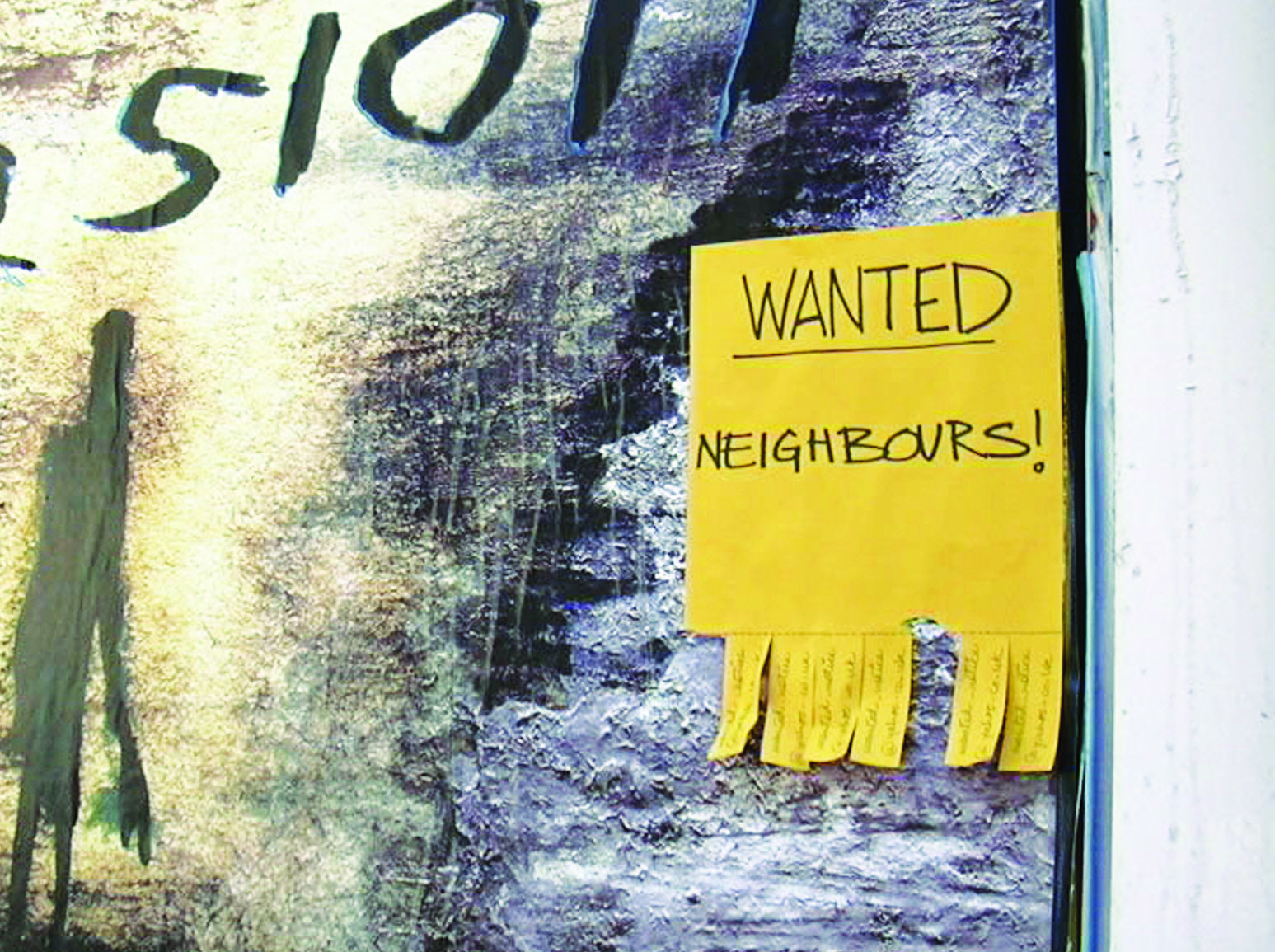 One participant wanted “neighbours”, while another wanted the “password for a 4Mbps wireless network”. At this point, the only potential neighbour Anab knew was the “user” who often shared music through her open wireless internet connection and iTunes. She tried to initiate ‘iTunes conversations’ with this person through her shared playlists, but got no response. 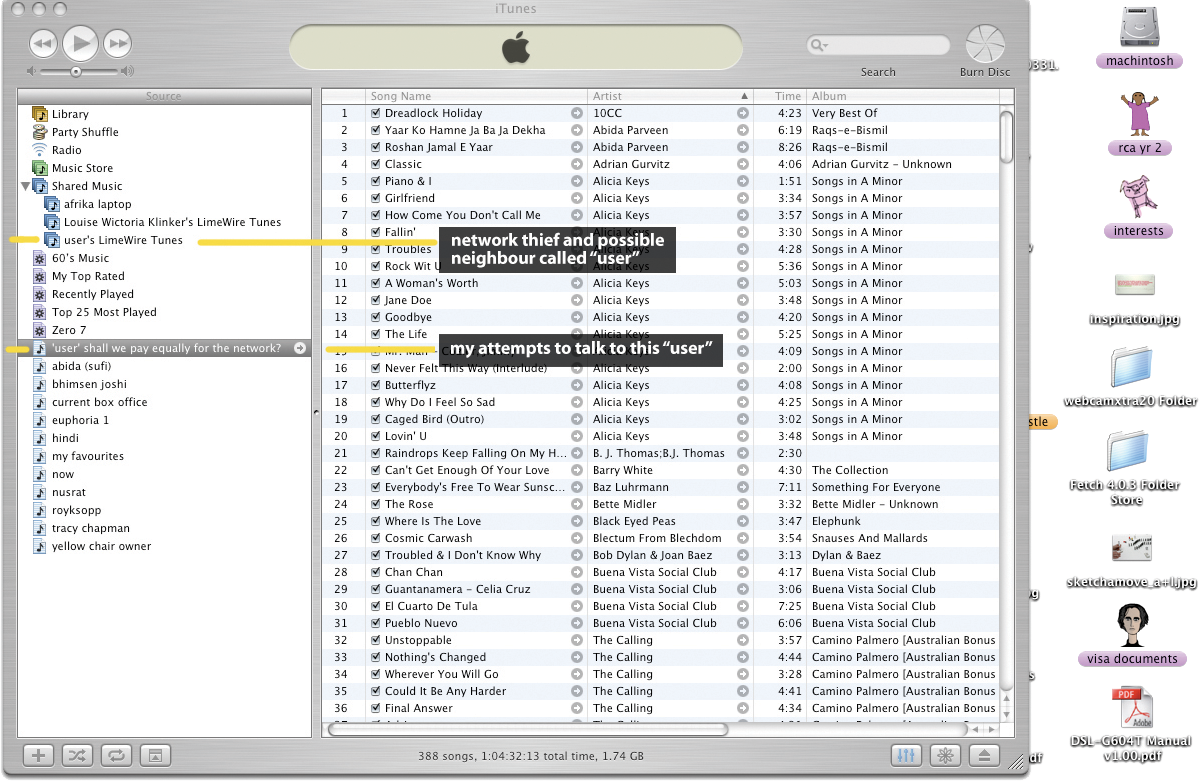 An attempt to initiate ‘itunes conversations’ with the ‘wifi thief’

Inspired by feedback from her participants, as well as the banyan tree and tea stalls of South Asia, and the shared yellow bicycles of Helsinki and Portland, she decided to try and foster a community-of-presence by opening her home WiFi to neighbours and passers-by.

“My Wi-Fi network is open for neighbours and passers-by. Free access from the yellow chair.”

By placing this sign and a yellow chair outside her house, she conducted a live service design intervention – effectively extending the boundaries of her home to encompass the reach of the wireless network.

This grassroots design approach illustrates how wireless technologies could recreate transient spaces at the threshold of the public and the private, the physical and the electronic.

Providing a hub for information exchange and transient encounters with strangers, this project prefigured the roll-out of USB dead drops, stimulating conversation and debate. Building on participant feedback, she began to iterate a series of soft services and shared community resources. 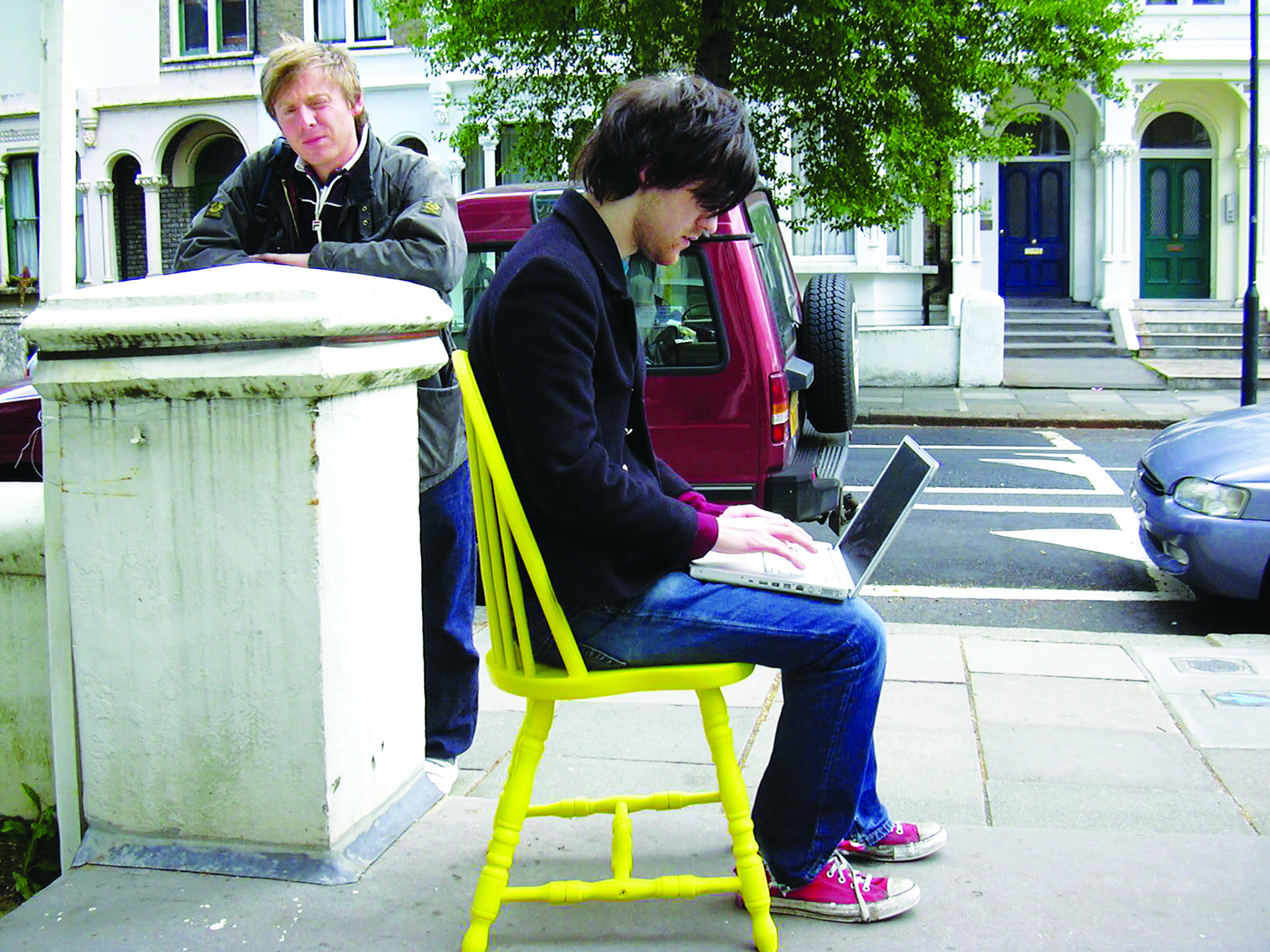 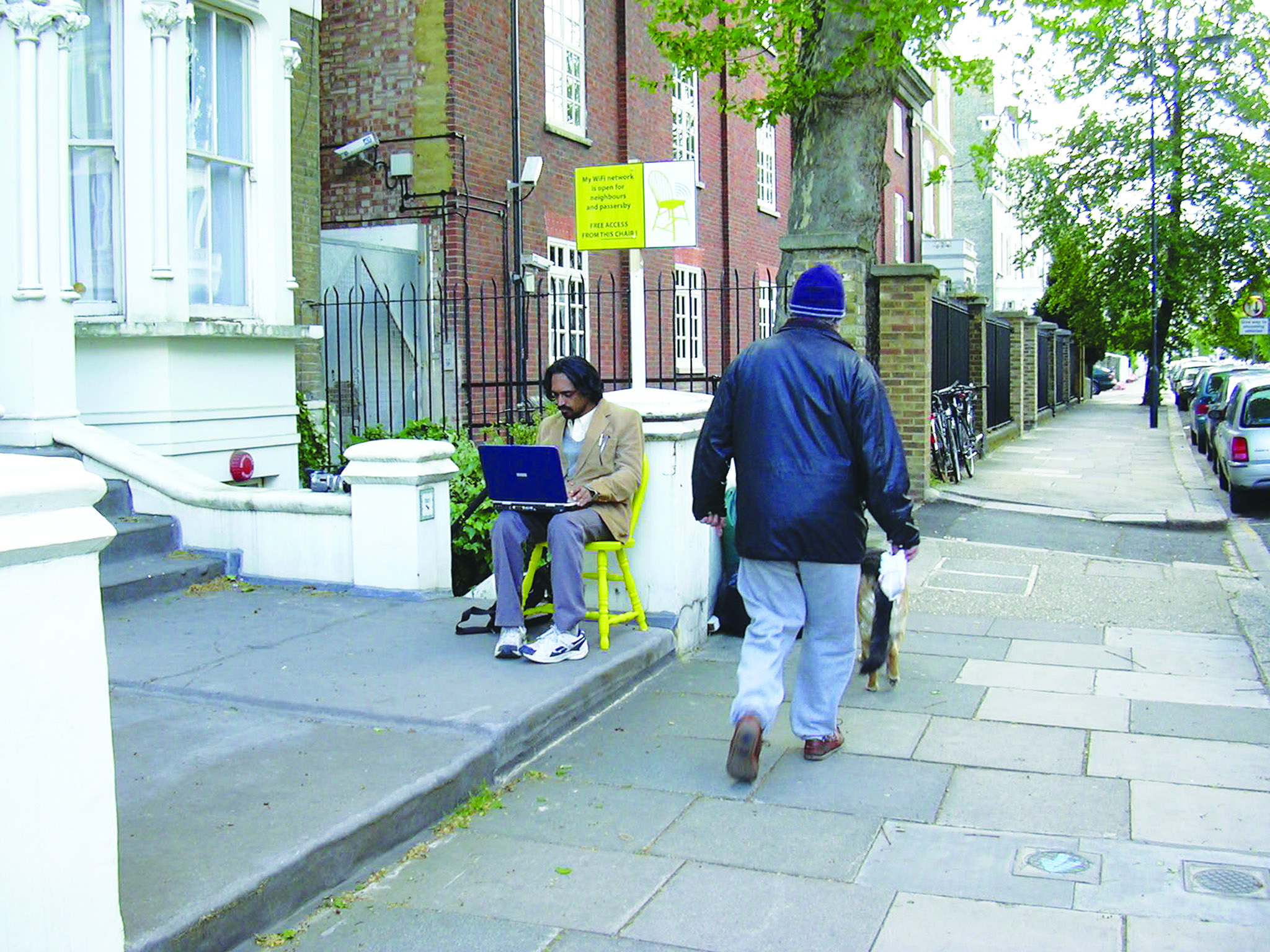 The project received an incredible response from communities and people across the world, and Anab sent the sign for the project to be replicated in Chicago, New Mexico, Kenya, and Germany.

For ISEA 2006, Anab collaborated with Tom Jenkins to propose ‘Yellow Chair San Jose’, developing the ’Yellow Chair Stories’ project further in the context of that hub of technology and commerce. Using several communication strategies in advance of the conference, they created a local network between a local household in San Jose and a roaming yellow chair based on free wifi in the city’s downtown district.

Two chairs sat in the path of directional antennas, creating a spatial, almost tangible space of connectivity. The two nodes communicated with each other through a central server, exchanging files, conversations and services.

People who sat on the chairs accessed both the web and the yellow chair network, sharing music, giving ideas to the Mayor, posting photographs and having intimate conversations.

The project was even covered at Worldchanging.com, who described the project as addressing:

‘some fundamental cultural issues around shared products and services, walkshed technologiesand the practice neighborliness in an alienated age. These are increasingly global concerns, as co-designer Anab Jain explained in an interview with Regine, “The yellow chair project/service attempted to rediscover and invent informal meeting spaces for our evolving Wi-Fi landscape, inspired by the banyan tree and the tea stalls in India, which are active hubs for information exchange and transient encounters.’ 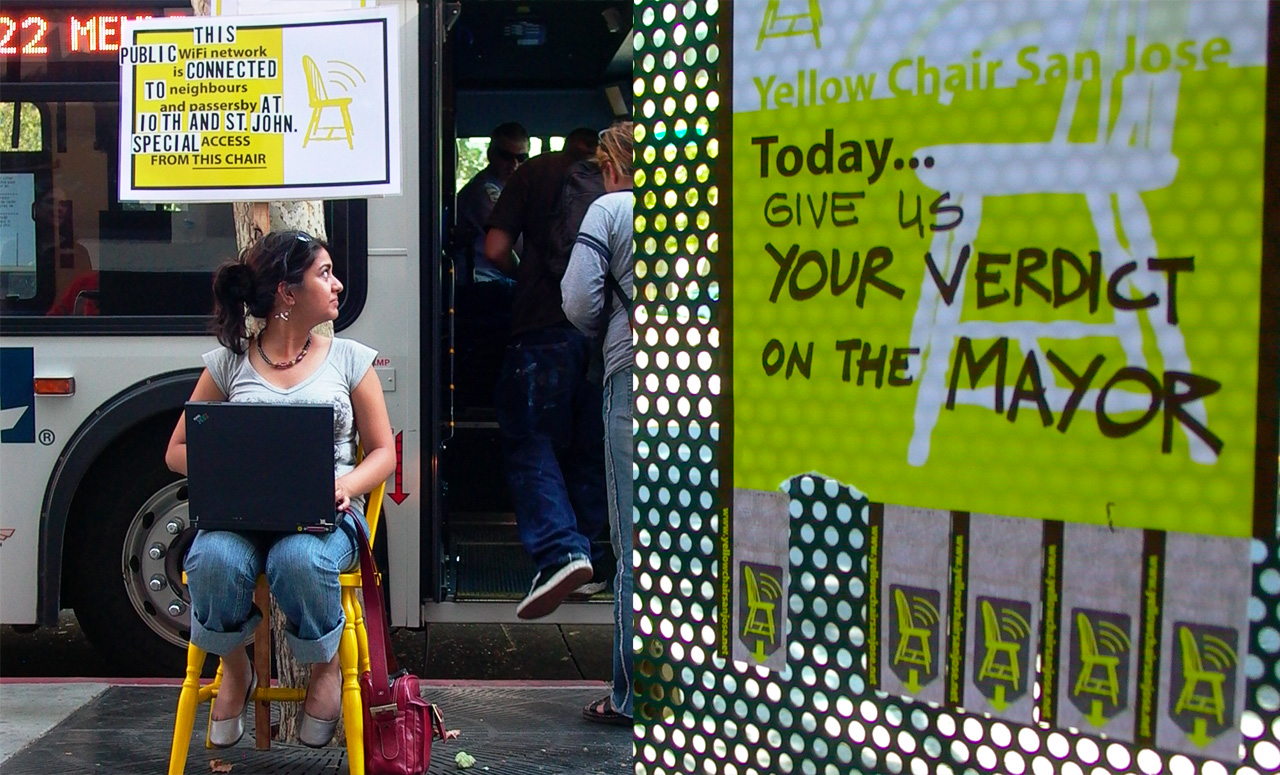