‘In ‘Dynamic Genetics vs. Mann’, we offer a glimpse of a future Britain. Using the evidence gathered in a legal case brought against one Arnold Mann, the project extrapolates current trends to envisage a world of mandatory health insurance, algorithmically-determined genetic risk profiling, and backstreet gene-fixing. The project’s protagonist, Arnold Mann, is a ‘regular guy’ who finds himself in an imposable situation when a government DNA spit test causes an unaffordable rise in his health insurance contributions. Trapped between inflated premiums and the costs of private genetic therapy, Mann approaches a black market clinic. Treated with a bootlegged therapy, the cost of Mann’s insurance initially falls, but the illegality of his actions are quickly discovered, and evidence is gathered by the therapy’s licence holder, Dynamic Genetics, in the case against Mann.

Comprising a range of photographs, artefacts, documents and video footage, the body of evidence asks the audience to explore the politics of power and control in a troublingly familiar future world. Pieced together, these evidential fragments question the ethical, political and economic implications of innovations in biotechnology that are quietly transforming our world. 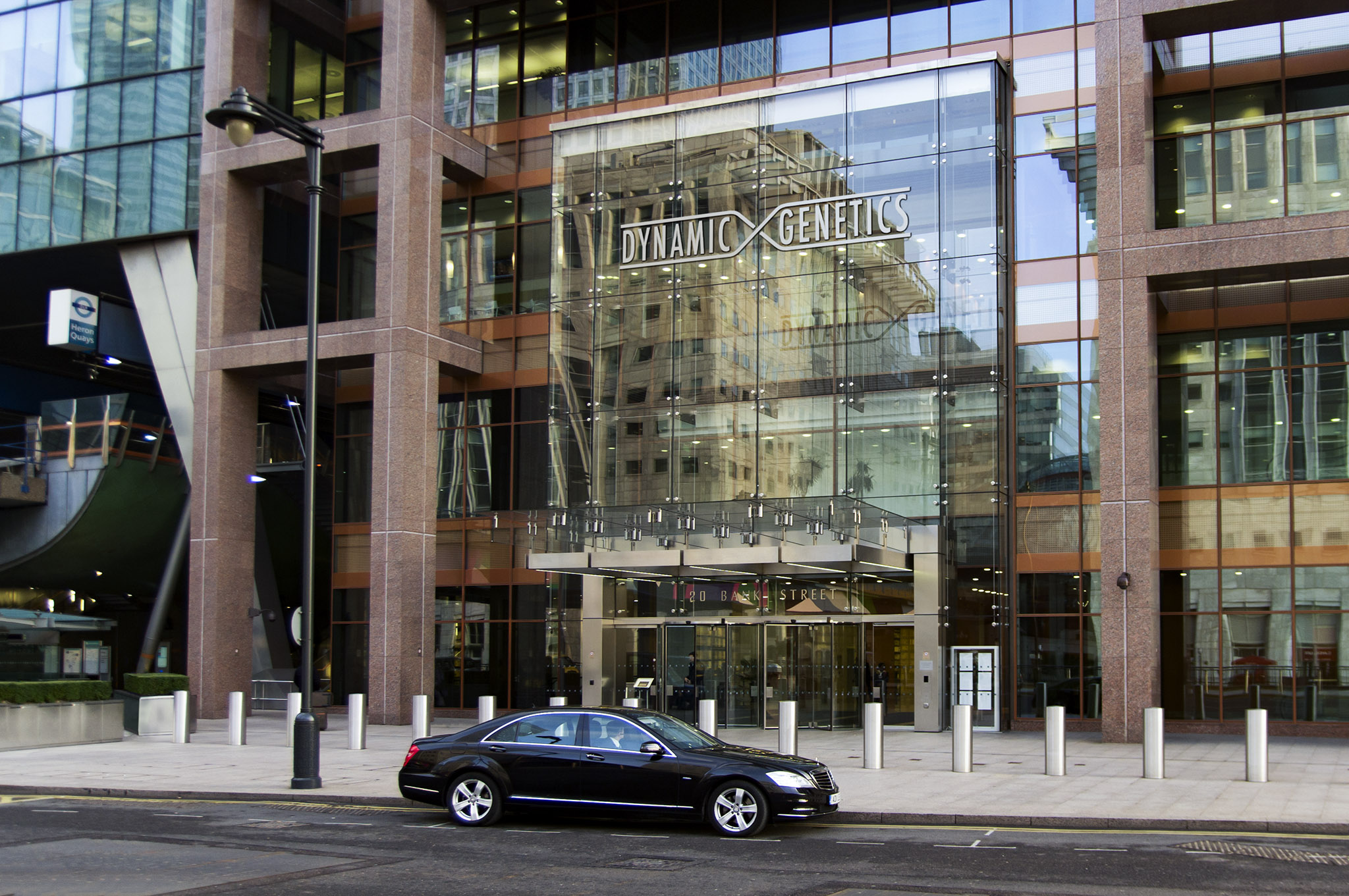 Below is an overview of the full project, highlighting key aspects of the narrative, our process and methods. If you would like to view the project in its entirety, please visit: www.dynamicgenetics.co.uk.

DYNAMIC GENETICS VERSUS MANN: THE PROJECT IN DEPTH

This project is part of Blueprints for the Unknown a research-project by Design Interactions Research under the European art-science program STUDIOLAB. The program’s focus is synthetic biology with the aim of exploring the impact of this new technology on society and culture through practice-based research projects, using design as a way to imagine, test and discuss.

Picking up on this brief we were keen to explore both the future ‘real world’ implications of synthetic biology as well as examine and unpack some of the related trends that are shaping our world today. We extrapolated a set of signals (economic, social, technological, behavioural) to give shape to a rich and interconnected world within which our project is situated.

The key forces at play in this world are:

1. Government spending continues to be reduced though the streamlining of infrastructure and services, and an increasing reliance on the private sector to deliver government services.

2. Reforms in the UK’s National Health Service (NHS) leads to the privatisation of healthcare provision, with the government’s role being reduced to providing access to private healthcare services through the implementation of Nationalised Health Insurance or the NHI.

3. Rules and regulations on the development, implementation and commercialisation of genetic profiling, gene therapy and synthetic biology are relaxed and laws to protect investment in these sectors passed as part of a general drive to encourage national innovation.

4. The ongoing confusion about the application of ‘big data’ which harbours ongoing legal, ethical and practical problems. We’re presented with a world that is constantly collecting and using our data but the mechanics and intentions are often obfuscated.

These trends led us to create a scenario examining and debating the applications of these technologies in the context of healthcare. What would be the unintended consequences of these shifts in legal frameworks? A lot of our early research that began last year (February 2012) explored the illegal economic activities that would rise when laws change and leave large populations vulnerable. In a recent piece ‘To Predict The Future Of Technology, Figure Out How People Will Use It Illegally’, Jamais Cascio clearly explains why its necessary to think along these lines:

New technologies don’t exist in a vacuum: they interact with both technological and non-technological systems as well as a variety of human wants and needs. This allows for the emergence of surprising combinations of goals and uses, many of which may be completely outside of the expectations of the designers. I find that it’s often useful to imagine the unintended, seedy, improper, or illicit uses of new tools and systems. Thinking along those lines can help to uncover the more subtle connections between a new technology and incumbent systems, spot hidden security flaws, or even reveal markets for a product that the developer had ignored.

In order to open up the complexities of this world, we created a narrative following the plight of a central protagonist Arnold Mann.

Mann’s finds his mandatory insurance contributions spike after a regulatory spit test, from the newly reformed NHI, determines his genetic profile contains elevated risk factors across a range of chronic health conditions. Caught between his hugely inflated insurance premium and the cost of private genetic therapy that could mitigate his health risks and lower his contributions, he turns to a drastic alternative. Mann approaches a black-market clinic that uses bootlegged genetics to treat him. This leads to a drop in his insurance cost but soon the illegality of his treatment is discovered, his genetic code analysed, and Dynamic Genetics the owner of the stolen treatment gather evidence to pursue a case against him.

Our work is the collection of evidences presented by security agency G5P on the behalf of Dynamic Genetics. The stark, but detailed nature of the evidences such as a sample spit kit, the stolen vials, an interrogation video are all presented to make a strong case against Mann, of illegally possessing Dynamic Genetics’ proprietary DNA.

SELECTION OF THE EVIDENCES PRESENTED IN THE COURT CASE

The main object that served as a piece of evidence was the improvised CO2 incubator that a deviant entrepreneur used in the manufacture of counterfeit genetic therapies. It was in this black market clinic that the defendant is accused of receiving his treatment. 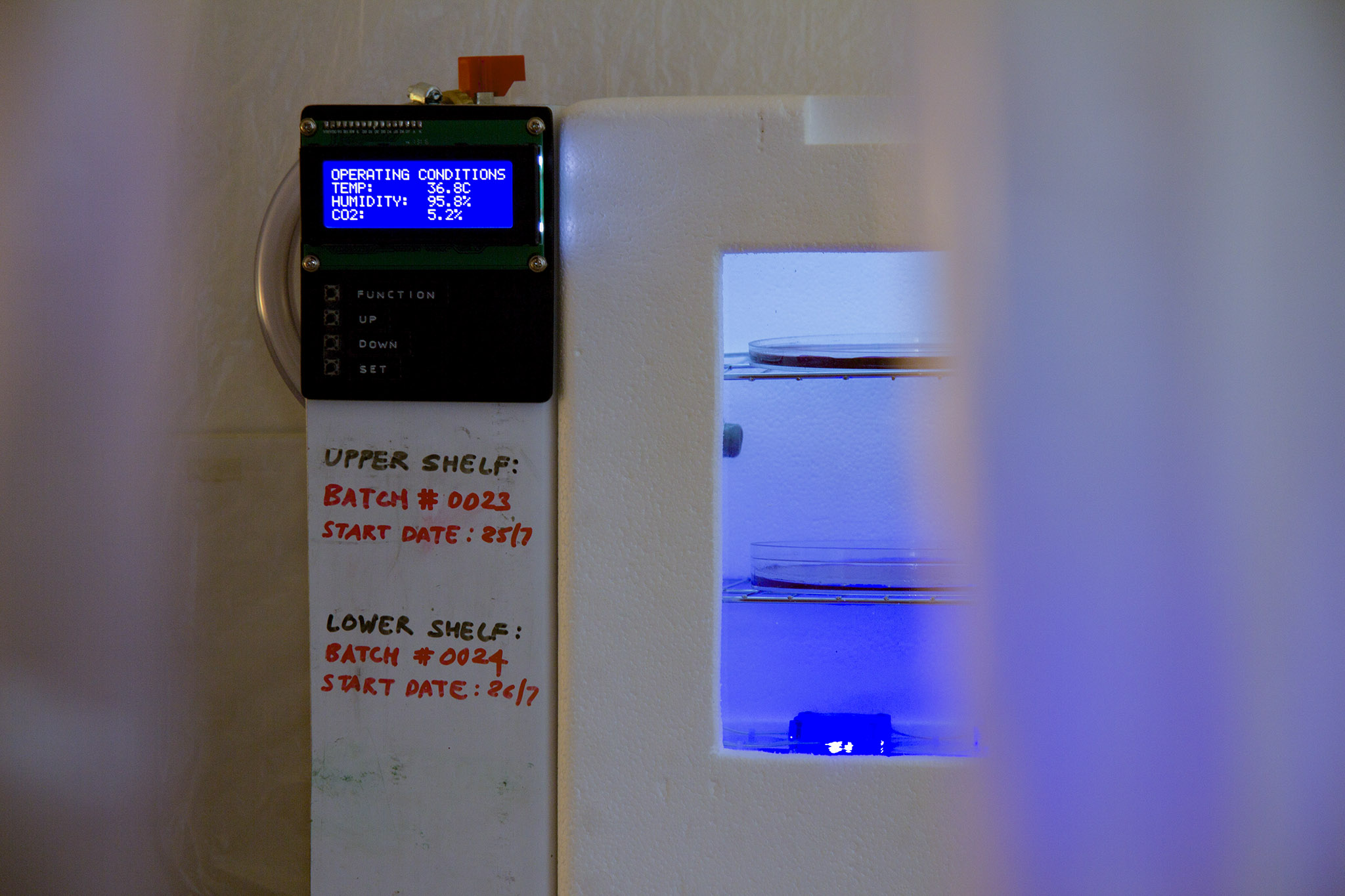 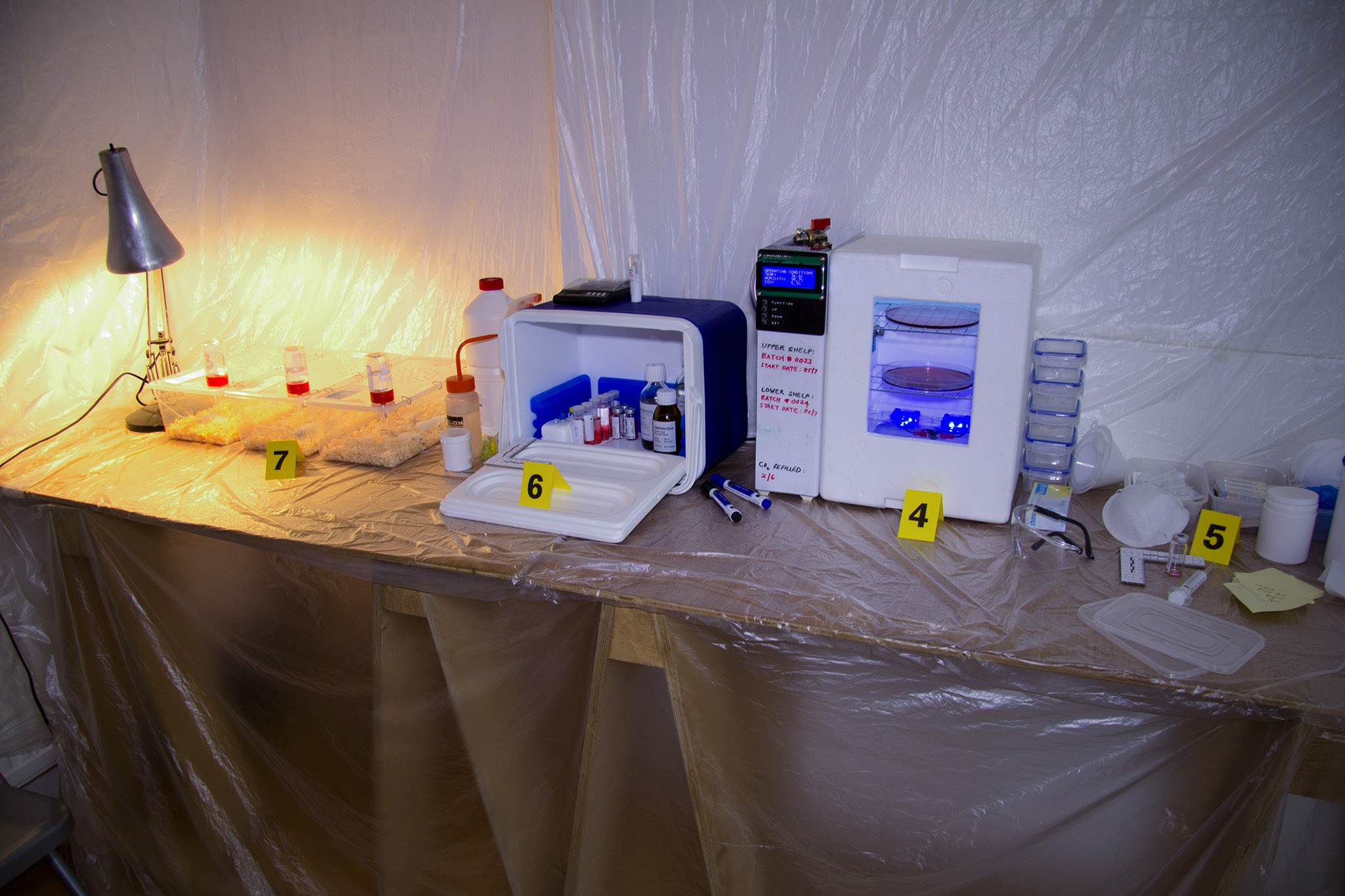 Series of forensic photographs documenting the layout of the crime scene. The area by the window appears to have been primarily used as a clinic for administering ‘treatments’. To the right is an area sectioned off with plastic sheeting used as a manufacturing lab. 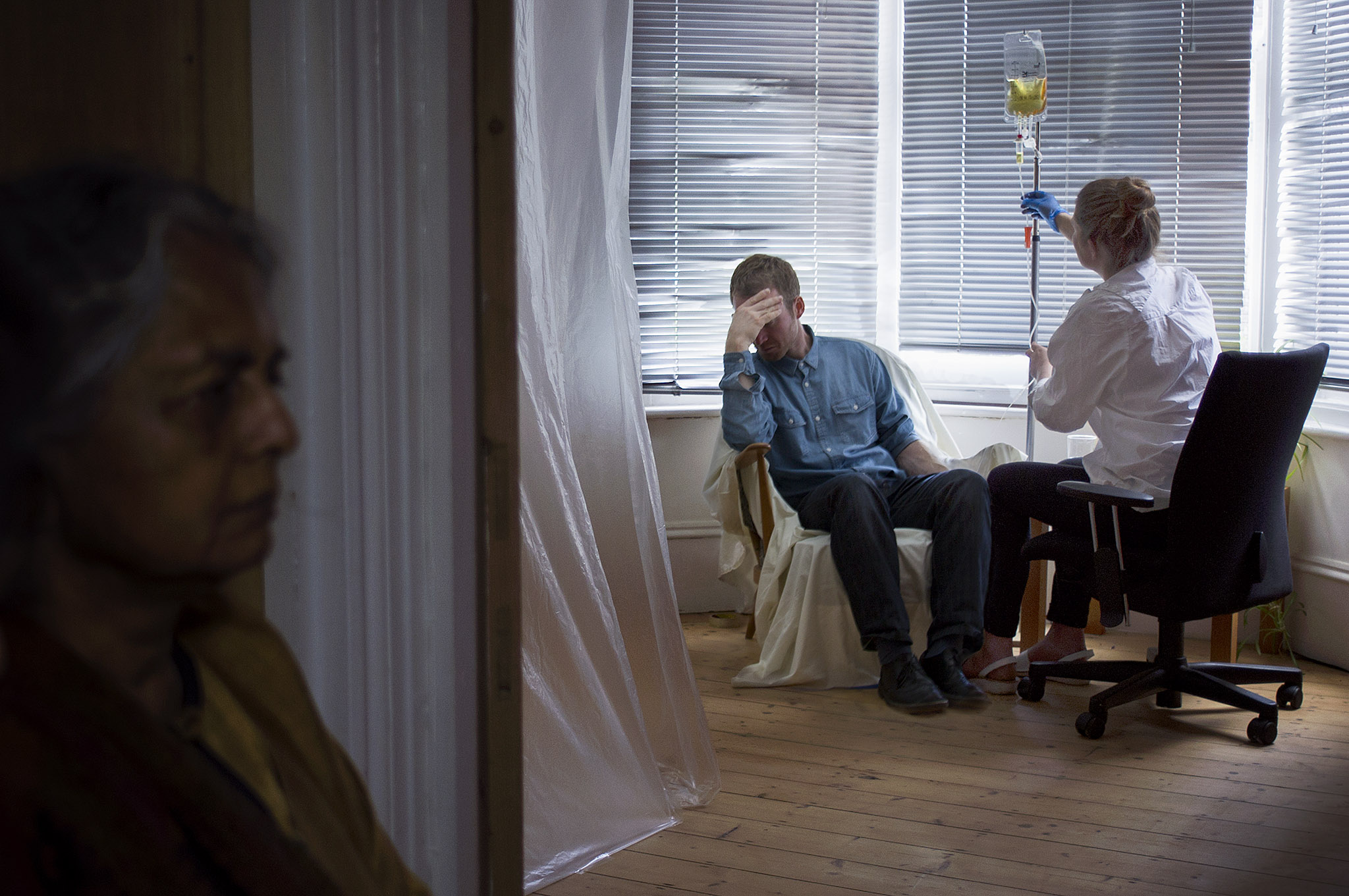 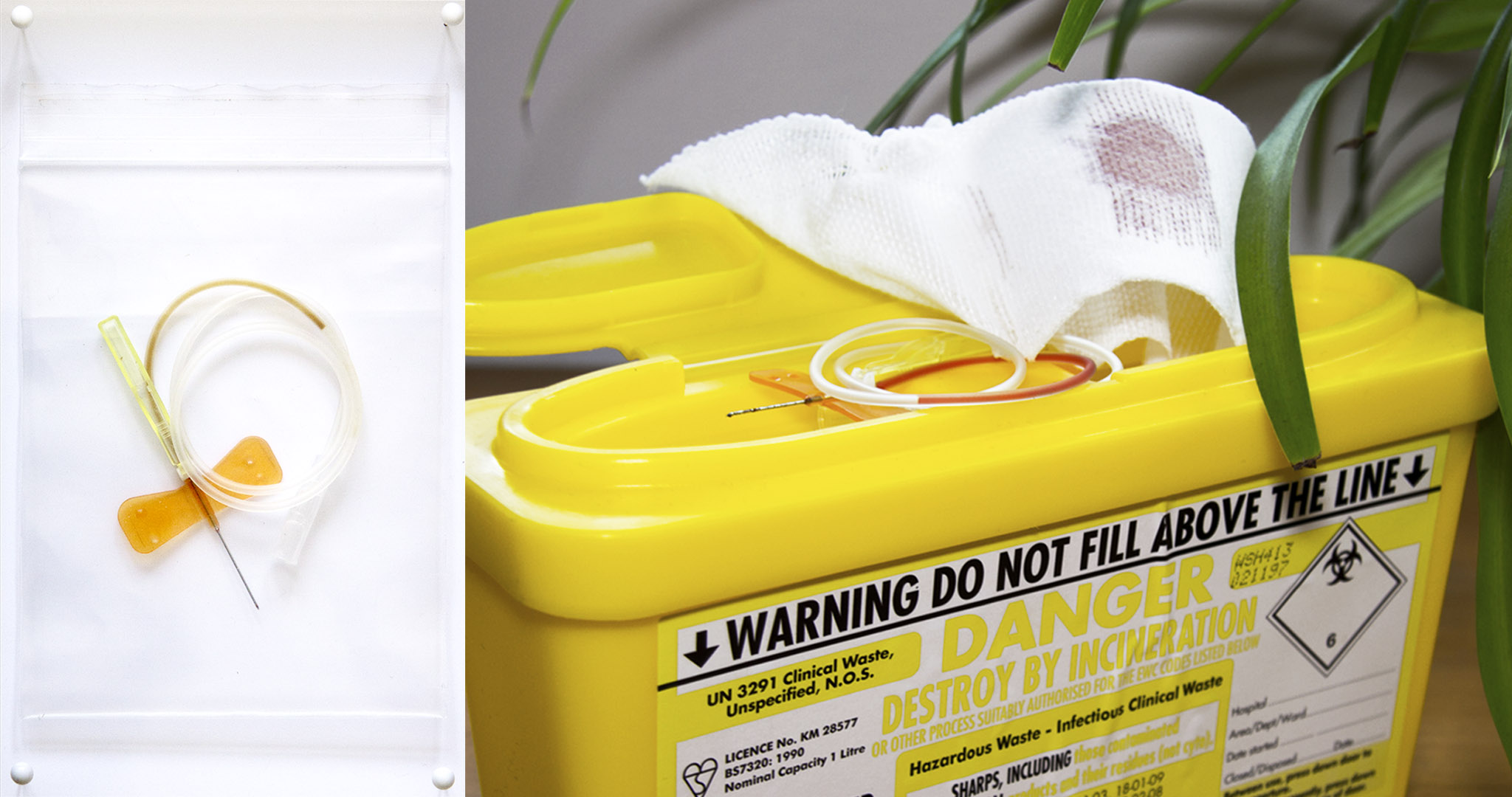 Sections of the defendant’s machine-readable DNA with matches to Dynamic Genetics’ copyright material highlighted in yellow. 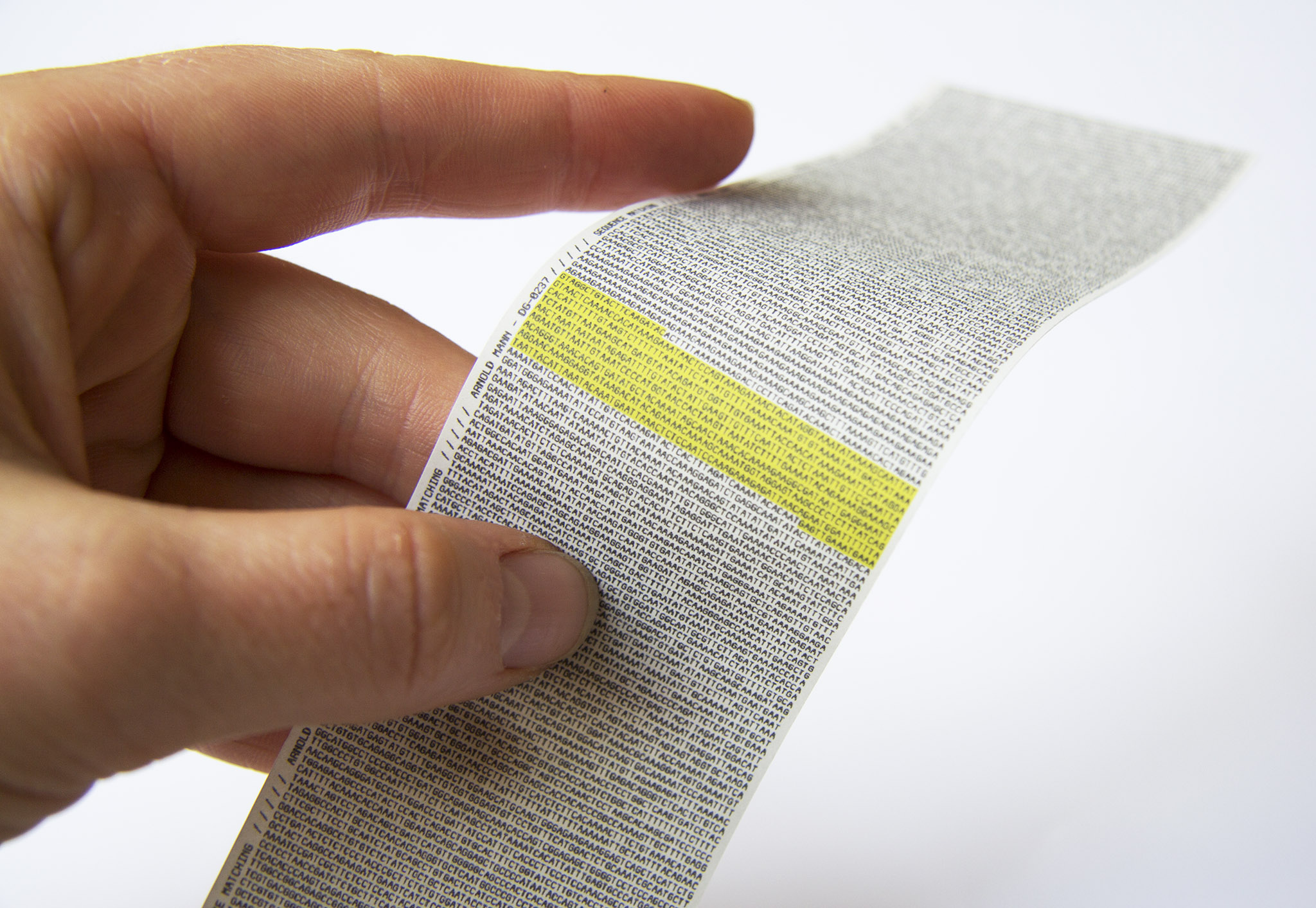 Other evidences include biopsy vials, forensic photographs documenting the layout of the crime scene, a video from the interrogation between G5P security officer and Mann, a newspaper clipping and a Dynamic Genetics Leaflet selling their gene therapy treatments.

PROJECT BACKGROUND. OUR INTERESTS AND INSPIRATIONS

1. Deviant Globalisation
We are interested in Nils Gilman’s ideas of Deviant Globalisation, the spaces of informal and illegal economic activities, and what it means to embrace the ambiguities of the neighbourhood, the street, and the black market. Some of these were realised in the Pirates of the Danube workshop.

2. Design for New Normal
Our ongoing research under this title, initially presented at the Global Design Forum and NEXT 2013 in Berlin, hugely influenced this project. By picking on some of the weak signals that form the ‘strange now’, and transforming them into a cautionary tale of a very potent near-future, our ambition is to help create an emotional connection with changing political and economic landscape.

3. The UK Government’s Changing Immigration Policies and Our Personal Situation
Last year, the UK Border Agency’s changes in immigration laws, tightening of border security and the impact of austerity measures on the agency’s bureacracy caused huge turmoil in our personal lives. Finding ourselves in a vulnerable position at the receiving end of such legal and political battles, meant that we were thinking about some of the themes explored here a lot. Having a very close up and personal encounter with how it feels to have your-life-hang-in-the-balance-of-forces outside of your control, was eye-opening.

4. Taryn Simon’s Works
Taryn Simon’s work ‘Contraband’ was inspirational in the project’s eventual form, where we were struck by how the juxtaposition of fragmented and often disconnected artifacts evoked the desire to speculate about larger contexts. We were also inspired by the way Taryn used framing and simple aesthetic cues to draw the disparate artifacts in her photographs into unified and powerful body of work.

5. India: The History and Future of Organ Trade (and Body Farming)
Besides kidney transplants, all sorts of organ trading activities were (and are still) prevelant in India. Anab’s experience of working with a group of homeless street dwellers who sold their blood for a living in her home city of Ahmedabad remains an unforgettable memory of a life far away from the shiny images of biotechnology we see in the media.

6. Influential Filmmakers
Anab’s education in film direction and her active participation in her alma mater NID’s film club celebrating world cinema continues to influence our work. One of the things we are fascinated by is popularly known as the Rashomon Effect based on Akira Kurosawa‘s film Rashomon, in which a crime witnessed by four individuals is described in four mutually contradictory ways. The film is based on the short story In a Grove by Ryūnosuke Akutagawa, although it is named for another Akutagawa story, Rashōmon.

The Rashomon effect is a term that has been used by a number of different scholars, journalists and film critics to refer to contradictory interpretations of the same events by different persons, a problem that arises in the process of uncovering truth.

THE FORM AND AESTHETICS: THE COURTCASE AS A SUPERFICTION

A Superfiction is a visual or conceptual artwork which uses fiction and appropriation to mirror organizations, business structures, and/or the lives of invented individuals, as defined by Peter Hill, 1989. Jon had played with this genre in his early work Ark.Inc and here we have developed that genre further. The courtcase became a mechanism of revealing the complexities that emerge at the intersection of people, technologies and politics. And through this form, we were able to engage more deeply with the potential wider impact of the technology rather than the potential of the technology itself.

History has shown that political and economic forces have just as great an influence on the development and application of technology as the aspirations of scientists and engineers. To this end, Dynamic Genetics vs. Mann explores not only the technological trajectory of synthetic biology, but by extrapolating current social, economic and political trends, it aims to ground the technology in a wider future landscape.

The project imagines a world in which synthetic biology and gene therapy have moved from the lab to the marketplace, making genetic sequencing and modification commonplace. In this world, the responsibilities of the state have shifted from healthcare provision to the provider of health insurance. To ensure ‘fairness and responsibility’ the government sets insurance ‘contributions’ on a person-by-person basis by calculating the healthcare costs associated with specific gene combinations.

What new legal and economic models might emerge under these conditions? How will intellectual property be applied and policed when designed genetic material makes its way into people’s bodies and their lives? Who are the winners and losers in such a world?