In early May, Jon and I were invited by the HEAD MEDIA DESIGN faculty in Geneva to lead a week long design futurescaping workshop for the first-year students on their postgraduate Media Design programme. Having not previously encountered speculative design, futurescaping, or design fiction, we were tasked with finding a way to drag this bundle of themes and techniques into the participants’ familiar everyday lives. We could easily have spent a week exploring different processes and methods, but, instead, we chose to develop a challenging context-specific brief, through which the HEAD students could start to grapple with some of the questions we ourselves have been exploring through our lab and studio activities.

Drawing on our recent work, talks, and ongoing personal encounters with immigration and the contemporary nation-state, we were drawn to a central theme of political complexity – challenging students to probe notions of borders, territories, and the fragile, increasingly precarious relationship between people and their governments. Developing the brief in collaboration with Justin Pickard, our spooky, mostly virtual studio associate, we wanted to leave workshop participants fully primed and poised, ready to develop their own original work on these and similar issues.

“Looking ahead to the Switzerland of 2025, this workshop challenges participants to design thoughtful responses to emerging political tensions at the intersection of migration, housing, climate change, robotics, surveillance, currency and finance, energy, public protest, and the hollowing out of the contemporary nation-state. Superflux will present the students with a series of weak signals from a near-future world and the students will work individually to respond to this world. At a deeper level, this workshop asks the students to consider the role their design practice may play in a future that is radically different from the one they may have been led to expect.”

We kicked off the workshop with a presentation expanding on the initial brief, describing how the workshop would use the notion of ‘failed states’ to ‘explore how political visions of the future fail to account for the complexity of the world, and in doing so, struggle to consider unforeseen events and uncertainty.’ We showed real-world examples of the ways in which unanticipated events – the collapse of the USSR, the Great Depression, etc. – have triggered paradigm shifts in national and international politics, the consequences of which we continue to experience in our everyday lives today, in 2014.

With this as background and context, we confronted the workshop participants with a future Switzerland of the mid-2020s; a small, federal state in a world where an increasingly powerful Chinese state holds controlling shares in a number of critical Swiss infrastructure projects, a network of surveillance UAVs have been deployed to monitor and pre-empt civil unrest, widespread food shortages have been met by the nationalisation of many Swiss food companies, and the persistent overuse of antibiotics has led the world into an era in which even minor infections can prove terminal.

Sharing our timeline of events from 2013-2025 based on current trends and weak signals, we tasked participants with digesting the interplay of a range of future developments, considering their implications for the everyday experience of future Swiss citizens and inhabitants, and designing a response to the challenges and consequences of this future world. We asked them to engage, critique and infiltrate the dominant political and economic order through a proposed service, product, experience, movement, campaign, or anything else that felt appropriate.

Europe according to Switzerland, 2010, Atlas of Prejudice, by Yanko Tsvetkov

After the initial splash presentation, participants ran through a series of discussions and initial brainstorms, touching on the recent immigration referendum, the incipient anxieties of French students, and the visual language of Swiss political propaganda. The students were asked to consider the elements of this future world that resonated with their own passions and personal politics; what their own lives – and those of their friends and family – might look like in this proximate future; and alternative roles for their own design practice in an unexpected or divergent environment. Over the first few days, participants made extensive use of mapping and fiction and they sought to orient themselves in relation to a series of much larger, interlocking social and technical systems. 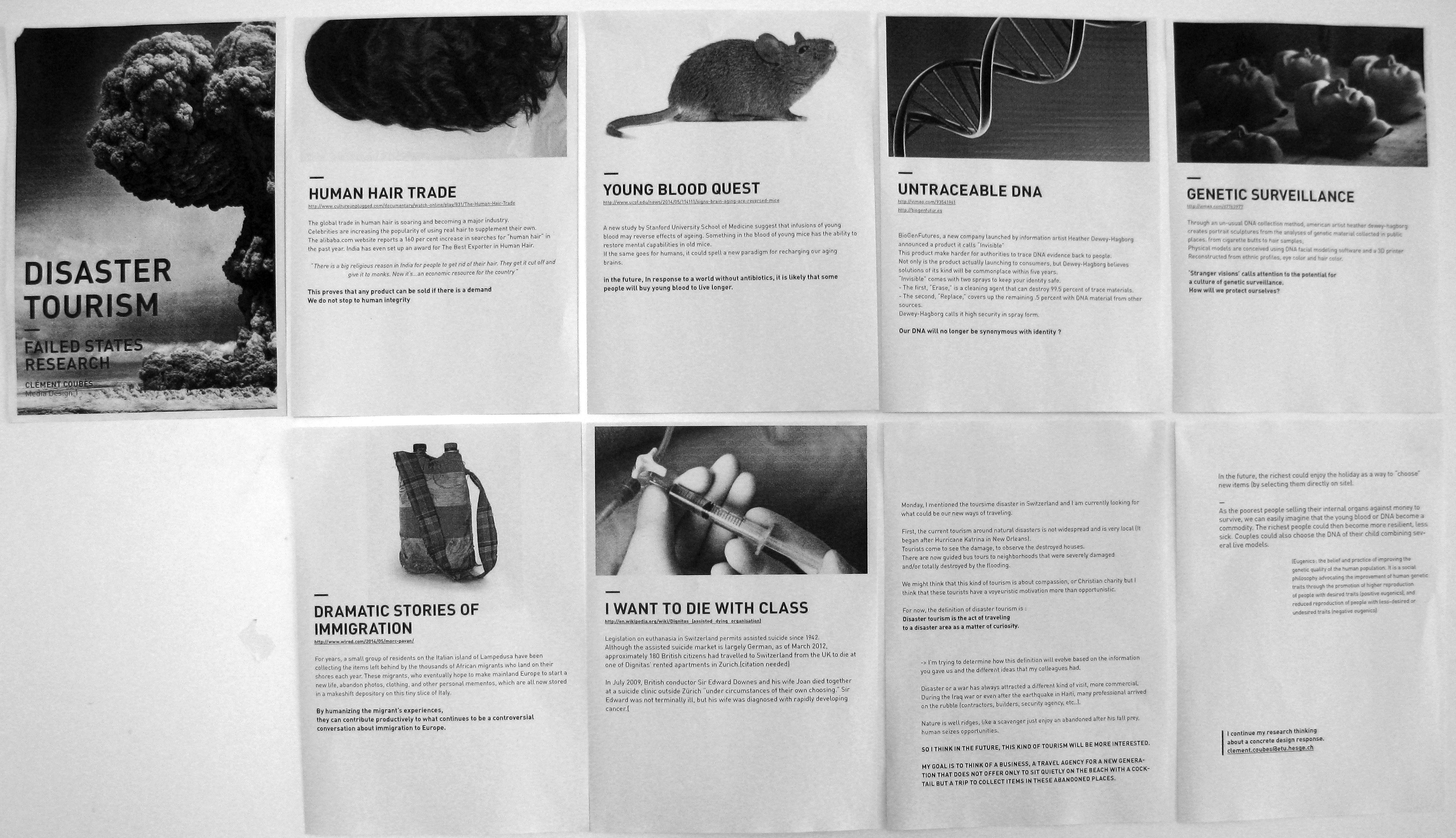 Image from Clement Coubès’ research. His project explored the idea of disaster tourism in the context of failed states.

After a round of early brainstorms we suggested the students write short stories, that situate them or their loved ones, within this world. This became a great mechanism to create deeper connections with the things that they otherwise did not consider. For instance, here’s an excerpt from Vytautas’s story:

I’m in my 2-room rented flat with my french girlfriend and our child. My salary is late by more than two months, as the Genevan canton suspended issuing residence permits due to the unclear future of the state. I was thinking of taking all the family and going home, for quite a while, up until Russians invaded Lithuania (for national security reasons, as they state) and are now “maintaining order” just like back in the Soviet Union days. Last week we buried our dog, which was shot in “self-defense” by one angry nationalist rioter. Nobody cares about it anyway, life’s just too difficult right now. Nobody except my daughter. I’m still here, because hoping to get an extension for a residence permit is still a better option than being a refugee with no nationality. All in all, I couldn’t even pass the border. 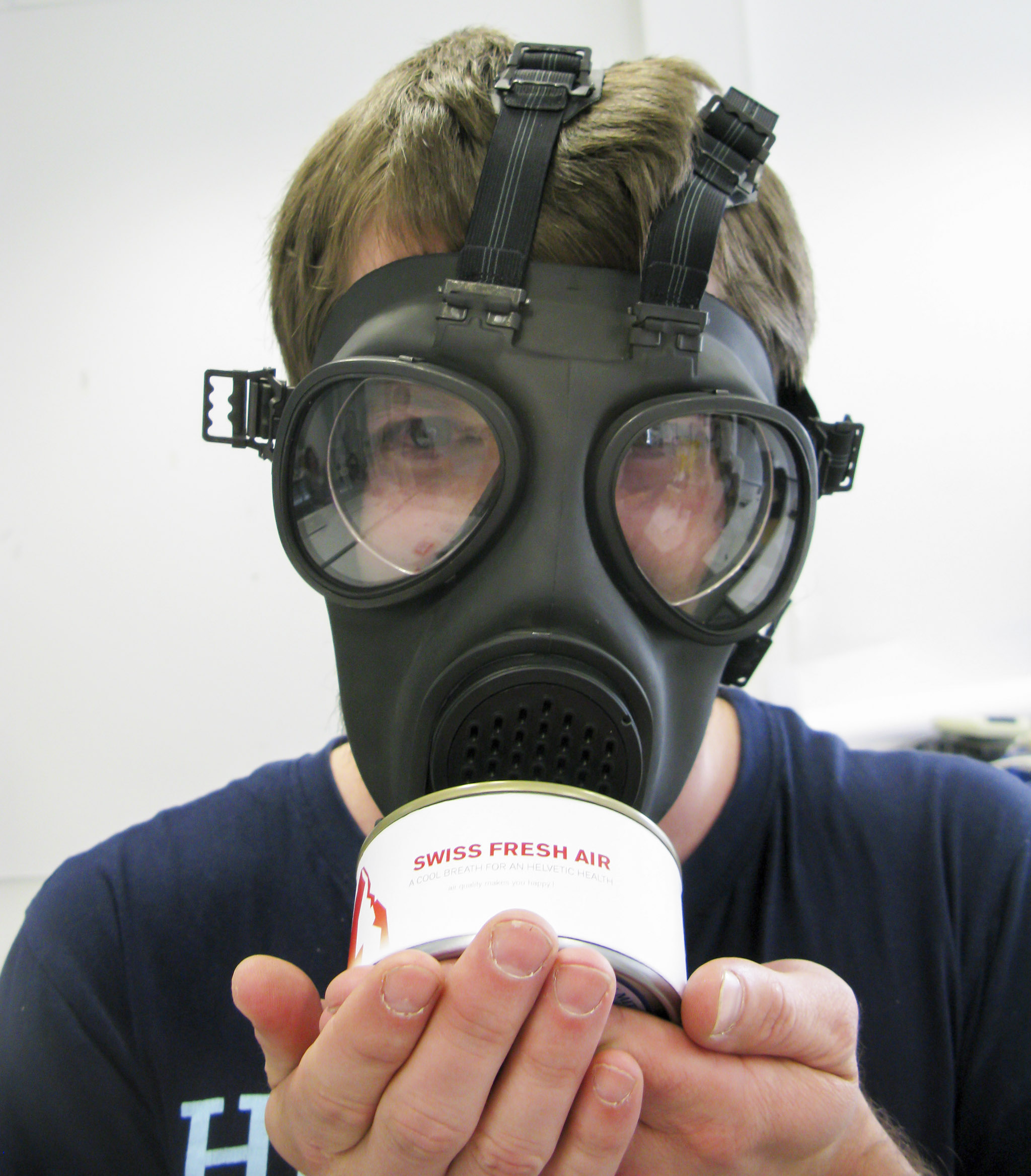 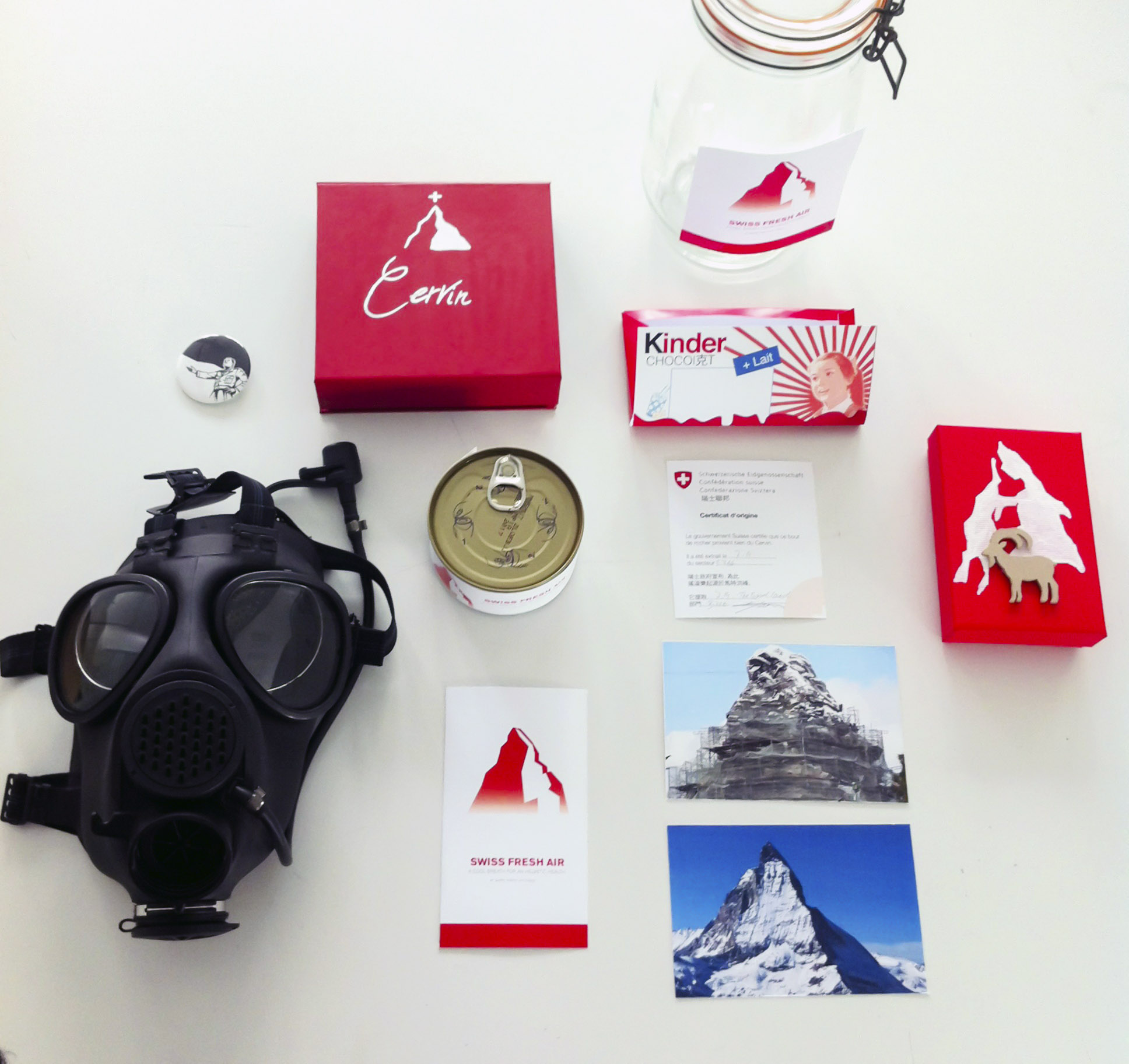 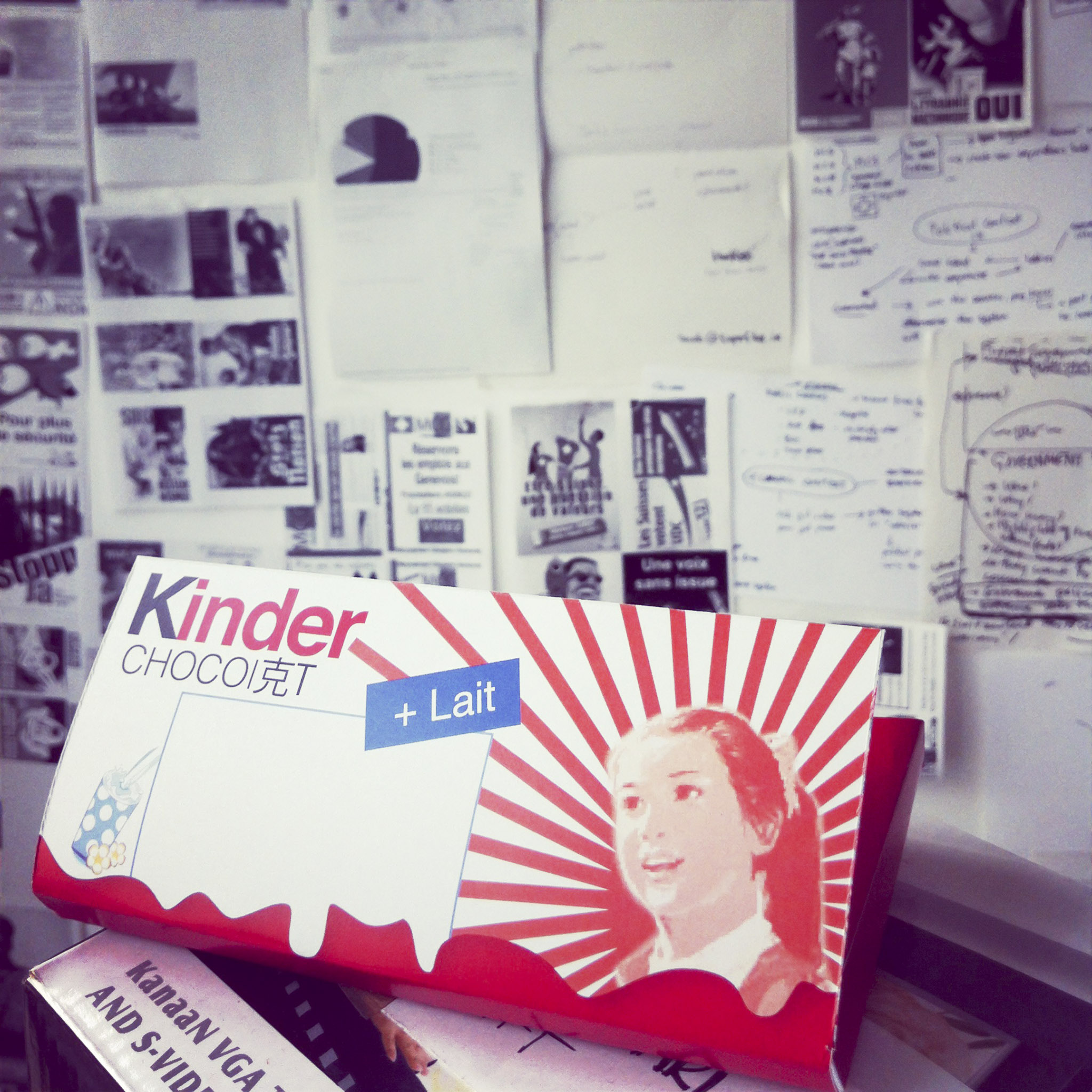 Gaetan Stierlin’s Proposal “Economic Wars”: In 2025, most of the Switerzland (public services, the mountains) is into the hand of foreign investors (mostly China). This investors control also the government. The Federal Counsil wants Swizterland to keep the beautiful image we have, so they’re using massive propaganda to convict the swiss to be happy and confident, has if nothing is happening. Swiss people feel like strangers in their own country, because they have to reimport swiss products, like the Kinder chocolate. The investors love it so much, it’s totally exported to China for themselves.

Participants’ work explored the various ways in which they might be able to either infiltrate the system, or design for it from within it. As workshop convenors, we found it emotionally and personally challenging to see how far they were willing to push themselves beyond their comfort zones, in order to explore new thematic and design territories.

Catherine Brand’s proposal “The Milky Way & New Kitchenware; or how the Swiss population copes with food shortages in 2025″: Since 2019 dramatic heat waves affect Europe. Governments have to face food shortages. In Switzerland, the price of food products has drastically increased, with basic food products having become a rare commodity.Switzerland has nationalised the country’s largest suppliers of in-vitro, lab grown meat. As the country has been kicked out of the Schengen area, they are not able to buy food products in neighbouring countries anymore. This would require a visa. Solutions have to be found in the domestic economy or on digital platforms.

Félicien Goguey’s Proposal: The DSPS works as a Peer 2 Peer ever-shifting network based on human flows. Every citizen taking part in it wears a mobile device and own an immobile mailbox. These devices allows to exchange data between citizens without any contact.Thus any citizen wearing a mobile device becomes a messenger of the network.  Public transportation (buses, trains, planes…) and crowded places are nodes where the messages can be exchanged. Messages are protected by PGP (Pretty Good Privacy). AI (maybe genetic algorithm) determines the shortest way to deliver the message and compute the path, based on the habits of the peers and predictions. Efficiency and delivery speed rely on the number of citizens using DSPS.

The set of final presentations was inspiring and rewarding, and the students who took the opportunity to engage with this complex and chaotic bundle of issues did remarkably well in such a short period of time.  “We learnt how to ask questions” was possibly one of the best feedback we could have asked for. Many thanks to Daniel Schiboz, Nicolas Nova and Marion Schmidt for the hospitality, we hope to be back at HEAD soon.